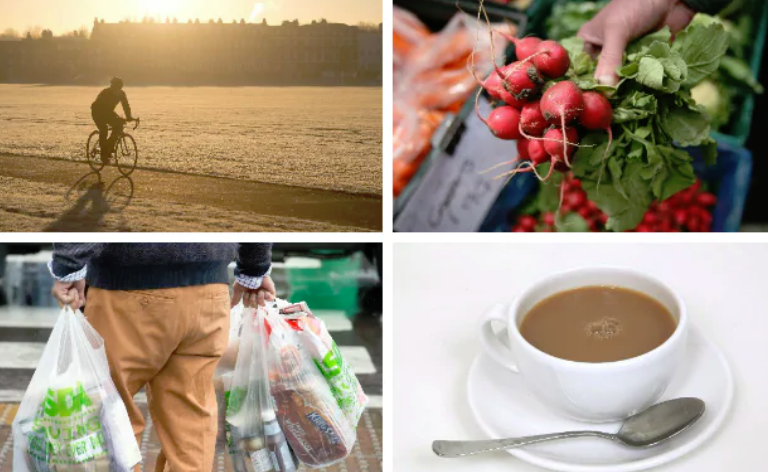 After a wasteful Christmas, here are some suggestions to restore your impact on the environment in 2019:

Not only is it better for the environment, but commuting to work on foot could also be better for your figure. According to a study from the London School of Economics, brisk walking is a better deterrent against obesity than any other form of exercise. Men and women who walk briskly for more than 30 minutes a day were found to have lower BMIs and smaller waists than everyone else involved in the study.  A separate study found that commuting to work by bus, train, bicycle or foot makes people happier than those who use their car each day instead.

Then switch to petrol or electric. Dame Sally Davies, the government’s chief medical officer, has said diesel cars should be phased out to cut the tens of thousands of deaths caused each year from air pollution. Diesel cars emit more nitrous oxides, which can cause health problems for people who breathe it in; most notably, lung and breathing problems, eye irritation and headaches.  But the problem is, petrol cars are no saints, either. They emit higher levels of carbon dioxide (CO2), which has less fewer immediate health issues than NOx, but is a greenhouse gas which causes huge problems for the environment at large. Diesel cars, on the whole, emit less CO2 than petrols.

Air pollution plays a contributing factor in at least 25,000 deaths in England each year,  triggering heart attacks and exacerbating respiratory conditions. Greener alternatives to having your own car include joining a car club, signing up to a ride-sharing app such as BlaBlaCar or using UberPool, a taxi service which matches up people travelling the same way.

There is growing evidence of the strain our meat consumption is placing on the environment, with every 1kg of meat protein requiring the same amount of energy to produce as between 3kg and 10kg of vegetable protein.  Some 12 per cent of us in Britain now follow a meat-free diet. And, according to The Vegan Society, the number of vegans in the UK has doubled in the last nine years from 150,000 to around 300,000.  If you can’t commit to going vegetarian full-time, here are some great recipes for those who want to cut back on meat a few days a week.

Not all ‘healthy’ foods are good for the environment. Take avocados, for example.  Our love for these green bombs of deliciousness – on toast in the morning; whizzed into smoothies; scattered over salads – could be harming the planet and fuelling deforestation in central Mexico.  Mexican farmers are thinning out and eradicating huge pine forests in order to illegally plant the money making fruit trees to meet a never-ending demand.  California has been hard hit by the rise in demand for avocados, as it takes 72 gallons of water to produce just one pound of the fruit. Last year, the area experienced its fourth consecutive annual drought.  The finger has also been pointed at almonds. This year-round crop guzzles around eight per cent of the state’s agricultural water supply as it tries to meet demand for 82 per cent of the world’s produce.

The growing, transportation, packaging, retailing and cooking of food, together with the clearing of land to grow food in the first place, accounts for as much as 30 per cent of Britain’s carbon footprint.  And when it comes to vegetables, nothing tastes as good as something you’ve grown yourself. You don’t need an allotment – a little bit of space in the back garden will do just as well. The trick is to make the most of the resources you have.

6. Think about your cosmetics

Microbeads in everyday household products like face and body scrubs could be banned from the end of this year under new Government plans.  The beads are flushed into rivers and seas by the trillion, causing havoc to marine life and can make their way into the human food chain.  It is estimated that as much as 86 tons of microplastics are released into the environment every year in the UK from facial exfoliants alone.  Plastic litter in the ocean is a fast growing problem, with large items, such as packaging, breaking down into so-called microplastics.

If you’re making tea or coffee and home, one quick tip is to fill the kettle with the amount of water you need, rather than filling it to the top every time.  If you’re using coffee pods, make sure you recycle them. Consumer research group Kantar Worldpanel reports that UK spending on coffee pods rose by more than 30 per cent in the year to June 2015, when we drank £109 million worth.  In 2016, Hamburg’s government offices banned the use of pod machines because of the waste they create. Although they are recyclable, most people just chuck their used capsules into landfill.  If you’re having tea or coffee to go, recycle your disposable cup. Last year, it emerged that fewer than one in 400 high street coffee chain paper cups are recycled, according to Simply Cups, which operates Britain’s only paper cup recycling service.

To cut back on waste, Starbucks announced it would offer customers who bring their own coffee cups a 50p discount.  The company has also decided to go one step further – thanks to campaigning by anti-waste campaigner and chef Hugh Fearnley-Whittingstall – by introducing the Frugalpac cup into its stores.  Created by British entrepreneur Martin Myerscough, the cup is recyclable thanks to the thin plastic liner designed to easily separate itself from the paper during the recycling process.

Last year saw a surge of labels and products that want to do things the right way.   The labels below are all fair trade, ethical and do their bit for the community and environment, so you’ll be proud to answer when someone asks ‘who made your clothes?’

There are plenty of greener, natural alternatives to chemical cleaning products for the home. Here are just a few to try.

Toilet cleaner -Use a can of cola to clean your toilet. The drink contains carbonic, citric and phosphoric acids which are often found in household cleaning products. Leave the liquid to sit in the basin for an hour, then use a brush to clean and flush away. If you don’t have any cola, try vinegar, which works in a similar way.

To eliminate bad smells in a fridge, try punching holes in an empty margarine box and filling it with coffee beans. Keep it in the fridge for a fresh scent. Alternatively, slicing a lemon and leaving it in the fridge does the same job.

Pour a cupful of bicarbonate of soda down the drain, add the same amount of heated vinegar, let it bubble and froth. Flush through with tap water.

To deodorise the waste disposal, freeze neat vinegar in ice trays, then run the cubes through the machine (lemon rinds also work well).

Clothes scent – Instead of turning to normal clothes conditioner, fill up a muslin bag with dried lavender, rose and geranium, soaked in lavender essential oil, and tuck it into clothes as they dry.

Clean wood floors with a mixture of equal parts water and vinegar.

Soak a cloth in vinegar, wrap round limescale-encrusted taps, leave for an hour, then remove the deposits with a damp cloth.

Remove the film that builds up in glass vases or decanters by pouring in a little vinegar, adding some rice and swirling it round until the deposits disappear. Rinse and leave to dry. The same method works very well on Thermos flasks with narrow necks.

Everybody wants to cut their fuel bills, and many people are concerned about saving the planet by reducing their use of fossil fuels. So what are best ways of achieving these aims?