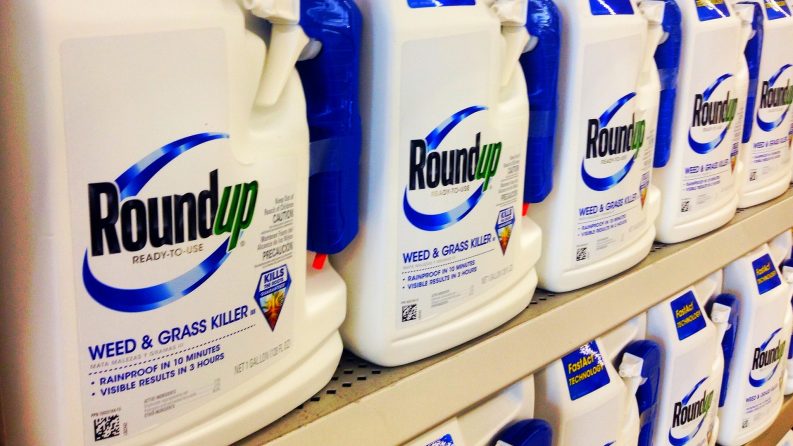 Excess levels of the herbicide glyphosate have been traced in the public water supply of Newport in Co Mayo.  Glyphosate is an active ingredient in over 750 products including Roundup weedkiller which is widely used by Irish farmers and gardeners.  Mayo County Council’s environment section is currently carrying out investigations in the catchment area to determine the source of this excess.

In 2018 there were 84 pesticide exceedances in public water supplies across Ireland – three of which were glyphosate.  According to Irish Water, there are already around 20 pesticide exceedances in water supplies (glyphosate in two cases) in 2019.  Irish Water said that it is collaborating with the National Pesticide and Drinking Water Action Group to ensure customers receive high-quality drinking water.

Both groups are calling on farmers to be particularly cautious when applying chemicals to their land as a single drop of pesticide can breach the drinking water limit in a small stream for up to 30km.  Farmers are being urged to be aware of nearby water sources, avoid open drains and reminded to not spray if strong rain or wind is forecast in the 48 hours following.

A recent study in Environmental Research found that glyphosate was detectable in the urine of 20 per cent of participants. The NUIG study found that dietary exposure through pesticide residues on fruit, vegetables, and grains after spraying is the most common exposure route.

In 2015 the International Agency for Research on Cancer (IARC), part of the World Health Organization (WHO), declared that glyphosate was ‘probably carcinogenic’ to humans.  However, the European Chemicals Agency (ECHA) said in 2015 that there wasn’t enough scientific evidence to prove that glyphosate causes cancer.

In another study conducted by MIT researcher Stephanie Seneff and Scientist Anthony Samsel, glyphosate was shown to be a causal factor in celiac disease and gluten intolerance.  It maintains that celiac disease patients are at higher risk of non-Hodgkin lymphoma and reproductive issues which are also caused by exposure to glyphosate.

Data obtained by The Times indicates that councils across Ireland used a similar amount of glyphosate-based weedkiller last year as compared to 2017 figures, with parks, playing pitches and other public lands sprayed with over 5,000 litres.  According to The Times, Dublin City Council sprayed 548 litres of herbicides containing glyphosate between January 2017 and May 2018. This is down from an estimated 3,500 litres used across the Irish capital in 2014.  Last year, the Council began trailing alternatives herbicides in some parts of the city. Councils in Leitrim and Laois also moved to alternative weed-killer in the past year.

Monsanto, the manufacturer of Roundup that recently merged with Bayer, is facing upwards of 13,000 lawsuits in the USA from people who allege that they developed cancer following repeated exposure to glyphosate in Roundup. In a recent lawsuit, a school groundskeeper received $78.5 million in damages after a court deemed that his terminal cancer was probably caused by glyphosate in the Roundup weedkiller he used on a daily basis.

Verde Environmental Consultants have built a team of water resource assessment specialists who are focused on delivering quality hydrogeological services to our clients in industry.

Verde provide all aspects of hydrogeological services such as: