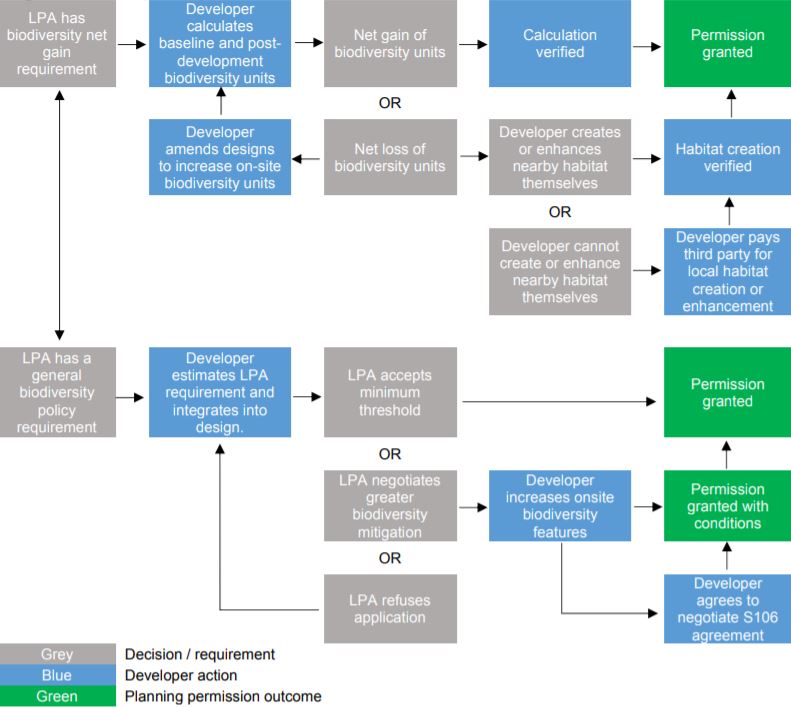 Defra has reported that the expected overall direct cost to developers of introducing compulsory biodiversity net gain (BNG) in England will be £199m/yr.  The familiarisation cost for developers of implementing the new system is estimated at £6.3m in the first year.

Biodiversity net gain requires developers to ensure habitats for wildlife are “enhanced and left in a measurably better state than they were pre-development”. They must assess the type of habitat before submitting plans and demonstrate how they will improve it, such as through green corridors, tree planting or nature spaces.

Legislation will require developments to achieve a 10% BNG. The system will be fully introduced after a two-year transition period, once the Environment Bill is law.  The cost of meeting BNG obligations for developers is estimated at £19,698/ha to create and maintain sites over a 30-years lifecycle. If Defra’s current plans are adopted, developers will be able to purchase credits called biodiversity units to offset their biodiversity obligations, with one unit costing £11,000. Revenues raised will be used to create and improve local nature sites.

The ongoing costs to local government of BNG are estimated £9.5m per year, including transition costs of £4.8m per year for the first two years. Central government’s ongoing costs are £1.8m for Natural England and £1.3m for Defra with a one-off capital cost of £0.5m.

The figures are contained in a Defra impact assessment on BNG and nature recovery strategies (NRSs). The assessment concludes: “Habitat creation will deliver a range of natural capital benefits to people and local communities beyond those benefits that are privately valued. Developers and local planning authorities will benefit from greater certainty and a level playing field, resulting from a consistent approach to demonstrating biodiversity net gain. This process consistency could result in savings for developers.”

A two-month consultation on BNG, whose mandatory introduction is included in the Environment Bill was carried out in December 2018. The consultation attracted almost 500 responses. Almost half came from planning authorities and conservation bodies but only 8% from developers. Fewer than 5% of developers though that BNG should mandatory compared to almost 70% of conservation bodies.

In its consultation response, published in July, the Government has confirmed its favoured approach – a mandatory BNG system backed by a biodiversity matrix, which has been published in the 25-year environment plan.  The response says that that the majority of the costs across BNG scenarios are expected to be less than 5% of land value. Regions with higher costs tend to be in the north.  It points out that the average value of land which has received planning permission for development is £6m/ha, compared to £21,947 for agricultural land.

The Government has said that it will not introduce broad exemptions from BNG obligations beyond those already proposed for permitted developments and small projects like house extensions. On current plans, marine environments and significant infrastructure projects will be exempted as will “brownfield sites that do not contain priority habitats and face genuine difficulties in delivering viable development.”

The response explains that the intention is that the whole of England will be covered by LNRSs, with no gaps or overlaps. A relevant public body will be appointed as responsible for each area and will produce a statement of biodiversity priorities and a local habitat map.  The response says: “We envisage that LNRSs will inform the town and country planning process by providing an important source of evidence to support plan-making, and underpinning actions local planning authorities protect and enhance biodiversity in their areas.”  It adds: “The cost of new burdens placed on local authorities through biodiversity net gain will be assessed and funded.” A register of compensatory habitat sites will be published and regularly updated.

The Royal Town Planning Institute said that BNG “must be complemented with proper resourcing for planners, including access to ecological expertise. This will enable the profession to fulfil its leadership function”.  It called for greater consideration of its impact in different parts of the country, including dense urban areas with limited biodiversity value and places with marginal viability and for Defra to carry out robust testing on a range of sites across England.