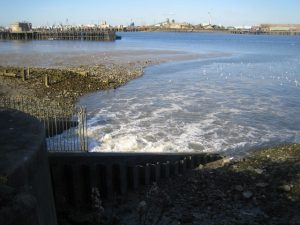 A failure at one of the large processing tanks at Ringsend wastewater treatment plant occurred at the weekend, and caused a discharge of sewage sludge into the lower Liffey estuary at Poolbeg, Irish Water has confirmed.  The discharge into Dublin Bay was via an outfall located about a kilometre from the plant at about 9am on Saturday, it added. An aerial photograph taken in the area by an amateur photographer using a drone showed a large discharge was continuing at 5.45pm that evening.

“The tank was isolated and repairs are now progressing. An investigation into the cause of the incident is ongoing. Irish Water can confirm that there are currently no planned discharges of untreated effluent into Dublin Bay,” a spokeswoman for Irish Water told The Irish Times.

To treat the increasing volumes of wastewater arriving at the plant to the required standard and capacity, Irish Water is investing more than €400 million in the staged upgrading of Ringsend Wastewater Treatment Plant to allow the wastewater of an additional “400,000 population equivalent” to be processed on the site.  Work started in February 2018. “Works are progressing well,” the spokeswoman said. “In June 2018, Irish Water submitted an application for strategic infrastructure development to An Bord Pleanála to further progress the upgrade of the plant.”

The proposed further upgrade includes the use of aerobic granular sludge technology (which treats sewage using aeration) “and would enable future population growth in the region and ensure the plant operated to the highest possible environmental standards”.  The successful test deployment of the technology at another location in Ireland meant a previous plan to build a nine-kilometre outfall tunnel to relocate discharge of treated effluent from the Ringsend plant into Dublin Bay did not need to proceed.

Irish Water is committed to safeguarding the environment and ensuring all wastewater is correctly treated and is safely returned to rivers, lakes and sea, its spokeswoman added.  Treatment of waste water at the Poolbeg facility has been found to be deficient by the Environmental Protection Agency in its annual reports on sewage processing facilities.  Storm water overflows were released untreated into Dublin Bay in October 2017 due to adverse weather conditions as a result of Storm Brian.