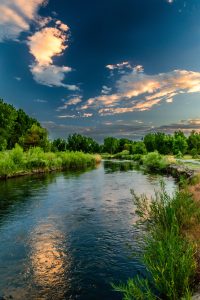 Pollution, over-abstraction and physical alterations — such as dams and straightening — continue to harm freshwater bodies across Europe. These pressures often have a combined effect on water ecosystems, contributing to biodiversity loss and threatening the benefits that people receive from water.

According to the EEA’s recent report, European waters — assessment of status and pressures 2018, only 39 % of surface waters achieve good or high ecological status. Generally, rivers and transitional waters that lead to a marine environment (e.g. delta areas) are in a worse state than lakes and coastal waters. The ecological status of natural water bodies is generally better than the status of heavily altered and artificial water bodies, such as reservoirs, canals and ports.

On the positive side, Europe’s groundwaters, which in many countries provide 80-100 % of drinking water, are generally clean, with 74 % of groundwater areas achieving good chemical status.

The main problems in surface water bodies include excessive nutrient pollution from agriculture, chemical pollution deposited from the air and built alterations that degrade or destroy habitats, especially for fish.  Intensive agriculture relies on synthetic fertilisers to increase crop yields. These fertilisers often work by introducing nitrogen and other chemical compounds into the soil. Nitrogen is a chemical element abundant in nature and essential for plant growth. However, some of the nitrogen intended for crops is not taken up by plants. This could be for a number reasons, such as the amount of fertiliser applied is more than the plant can absorb or it is not applied during the plant’s growing period. This excess nitrogen finds its way to water bodies.

Similar to its impacts on land-based crops, excess nitrogen in water boosts the growth of certain water plants and algae in a process known as eutrophication. This extra growth depletes the oxygen in water to the detriment of other species living in that water body. Agriculture, however, is not the only source of nitrogen ending up in water. Industrial facilities or vehicles running on diesel can also release significant amounts of nitrogen compounds into the atmosphere, which are later deposited on land and water surfaces.

Emissions of heavy metals from industry to water are decreasing rapidly, according to a recent EEA analysis of the data in the European Pollutant Release and Transfer Register (E-PRTR). The analysis found that environmental pressures caused by industrial emissions of eight key heavy metals to water decreased by 34 % from 2010 to 2016. Mining activities accounted for 19 % and intensive aquaculture for 14 % of those pressures. In intensive aquaculture, copper and zinc leak to the sea from fish cages, in which the metals are used to protect them from corrosion and growth of marine organisms. The harmful effects of heavy metals may include, for example, learning, behavioural and fertility problems in animals and humans.

Other sources of pollution are also emerging i.e. pollution from pharmaceutical products, such as antibiotics and anti-depressants, has been increasingly detected in water and is impacting aquatic species’ hormones and behaviour.

Verde Environmental Consultants has built a team of water resource assessment specialists who are focused on delivering quality hydrogeological services to our clients such as groundwater abstraction feasibility assessments, authorisation of discharges to groundwater technical assessments and water quality/level monitoring.