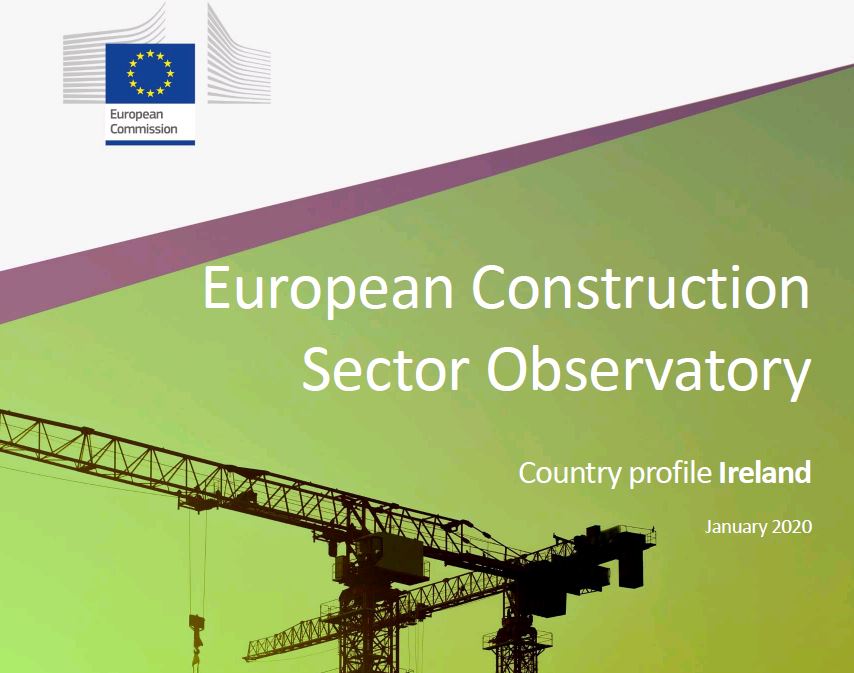 The construction sector plays a key role in Europe’s economy, and it is shaped by the policy measures taken by national governments. The European Construction Sector Observatory (ECSO) is a COSME initiative that analyses the construction sector in the 27 Member States and the United Kingdom. It aims to provide valuable insights on market conditions and policy developments. Check out the most recent materials.

ECSO has been actively observing the EU construction sector since 2015.

The Irish economy has recorded a solid growth in 2018, with the GDP rising annually by 7.5%. This is driven by enhanced employment, private consumption, alongside strong investment in construction. Although forecasts for the sector, as well as for the general economy, remain rather positive, uncertainty persists, linked notably to the outcome of the Brexit negotiations.

According to Central Statistics Office (CSO), new dwelling completions experienced a Year on Year (YoY) increase of 22.0% in third quarter of 2019, compared to the previous year, reaching 5,667 dwellings. The increase was specifically driven by a 81.1% increase in the number of apartment completions during the same period6. However, it should be noted that this is coming off a very low base.

Even with this increase in housing supply, there is still a long way to go to satisfy the housing demand. For instance, in terms of social housing, the supply stood at 10,000 homes for a demand amounting to 72,000 in 20197. To tackle the housing shortage, the government launched the Rebuilding Ireland Action Plan, aiming to deliver 47,000 new social homes by the end of 2021. This would amount to an average of 25,000 new dwellings per year. Moreover, the National Asset Management Agency (NAMA) plans to fund the delivery of up to 20,000 new units until 2020.

The need for continued provision of housing will increase in the future, to cater for the estimated 1 million people projected to be living in the country by the year 2040 as forecasted by the National Development Plan Project Ireland.

Despite the strong recovery of the construction sector, the civil engineering segment has not developed at the same pace as other construction activities, partly due to previous fiscal austerity measures. In fact, the Construction Industry Federation of Ireland (CIF) indicate that, in 2018, the commercial and civil construction sector increased by half the rate of the housing sector8. However, prospects remain positive with the introduction of the new Project Ireland 2040. The latter plans a total investment of EUR 116 billion for public infrastructure and capital works between 2018 and 2027.

The Irish construction sector suffers from a shortage of skilled labour, requiring an additional 112,000 workers by 2020. This will be a key challenge to address, to ensure the growth of the construction sector. Initiatives including the National Skills Strategy 2025 and Action Plan for Jobs aim at improving and expanding workers’ skills, including digital skills.

The revival of the Irish construction sector, underway since 2013, is expected to continue over the coming years. This will be driven by increasing residential and infrastructural investments planned over the next ten years. Upskilling of the Irish workforce is of paramount importance for the sector to remain competitive.