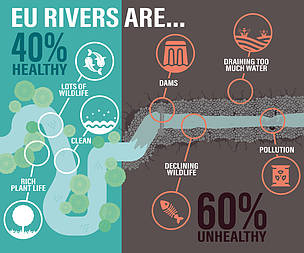 Further to our blog post EU Commission reviews progress made in water quality and flood risk management, the WWF European Policy Office issued its opinion on the findings.

Europe’s rivers are suffering. Despite the EU’s strong water legislation, the European Commission’s latest report on its implementation, published today, paints a bleak picture. Although some progress has been made, Member States are not on track to bring Europe’s rivers, lakes, wetlands, streams, groundwater, transitional and coastal waters to good health by 2027.  For WWF, the report provides yet more evidence that Member States are seriously undermining their legal commitments and, in doing so, threatening the availability of water for nature and for people.

The European Commission’s fifth report on the implementation of the EU Water Framework Directive (WFD) is based on Member States’ River Basin Management Plans (RBMPs) for the period 2015-2021. These plans are a requirement of the legislation, outlining governments’ plans to achieve its objectives, and are an effective tool for achieving the protection, improvement and sustainable use of freshwater across the EU. Based on the assessment of the RBMPs, the European Commission has issued recommendations for Member States to improve water management, the report shows that that a significant shift in the way they address the main pressures on their waters (such as agricultural pollution or excessive use of water) is urgently needed.

“With only 40% of EU rivers, lakes and wetlands currently healthy, it is hugely disappointing, not to mention irresponsible, to see that the most effective tool for protecting and restoring Europe’s waters is still not being used to its full potential”, said Andreas Baumüller, Head of Natural Resources at WWF’s European Policy Office. “To add insult to injury, Member States are now opting for the easy way out and pushing for the Water Framework Directive to be significantly weakened during the European Commission’s ongoing fitness-check. The European Commission is also continuing to fail to properly enforce the law. But EU citizens are watching them. More than 300,000 people have already vouched for the Directive through the #ProtectWater campaign. Will they listen up or continue to look the other way?”

Full implementation of the WFD requires commitment and appropriate funding, but the vast majority of Member States are continuing to use (and misuse) the various types of exemptions provided under the WFD. Around half of Europe’s water bodies (surface and groundwater) are currently under exemption. Moreover, the Commission’s report points to the lack of adequate funding to implement the legislation’s control measures.

“Our rivers and wetlands are dying under our very eyes as a result of pollution and destructive infrastructure – and EU governments are not batting an eyelid. This is unacceptable and completely goes against their citizens’ interests. It also violates our  strong EU water legislation, which they themselves developed and committed to.” said Martina Mlinaric, Senior Water Policy Officer at WWF’s European Policy Office. “What is also evident from the European Commission’s assessment, is that the plans they have put in place to protect and restore freshwater ecosystems are totally unambitious, demonstrating that they have zero aspirations, let alone intentions, to tackle the dire state of Europe’s waters.”