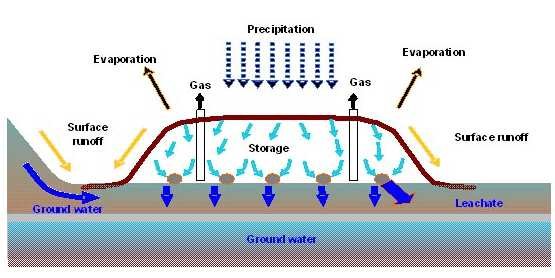 Cork County Council has appeared in court charged with allowing a build up of potentially explosive gas and an accumulation of a “dangerous” level of polluted liquid at a Carrigtwohill landfill site.  The local authority admitted it has not burned off gas arising from the East Cork Landfill Site in line with its responsibilities as site licence holder.

The Environmental Protection Agency – the authority that brought the case against the Council – told Midleton District Court that the problems it identified at the site remained months after it had raised concerns with senior officials at the local authority.  EPA inspector, Joe Hunter, told Judge Brian Sheridan that he inspected the site on November 15, 2018, and found that a gas flare – to burn off landfill gas so as to avoid a build up that could cause explosions – was not working.  He said that historical data covering the six months preceding his inspection showed the flare was not working for most of that period. He said a surveillance system that was supposed to keep records of site management was not maintained in line with regulations.

Mr Hunter said leachate – a liquid which has percolated through the waste in a landfill – had accumulated at levels of up to 5.8m, when regulations warn it should not exceed one metre. Mr Hunter said these levels of leachate were “dangerously high” and said an excessive build-up of leachate could rupture the lining system in the landfill that protects the surrounding environment from contamination.

The court heard that senior council officials were informed of these shortcomings last December, but that some issues remained outstanding in subsequent inspections in April and May of this year.  Judge Sheridan described Mr Hunter’s testimony as “startling” and said it was the first time he has had Cork County Council appear as a defendant in his court.  Jason Teahan of Fieldfisher Solicitors, representing the EPA, said the Council was facing 11 charges in total, and was entering a plea in five of these.

The Council accepted charges that it failed to maintain both landfill gas flares, and the Supervisory Control & Data Acquisition system that oversees the landfill gas management scheme in a fully operational manner. It was also conceded that it failed to ensure that the leachate levels did not exceed a level of 1 metre over the high-density polyethylene liner of the waste landfill cells.

The Council can be fined a maximum of €5,000 for each charge.  Stephen McDevitt, representing Cork County Council, emphasised that the local authority has made progress since the investigations. He said the leachate goes to the nearby Carrigtwohill waste water site, and that the Council has not had the same level of access to the plant since Irish Water assumed the running of the facility.  While accepting the Council has made improvements, Mr Teahan said the EPA believes the offences were serious enough to merit conviction. However he said that decision was a matter for the court.  “All improvements made so far are standard things we would expect, and they are still not fully there,” Mr Hunter said.

Verde Environmental Consultants have many years experience working with clients to gather information required by licensing and permitting authorities, from initial discussions and licence scoping with the Environmental Protection Agency (EPA), through to completion of application form and compilation of necessary assessments.

Our experience and knowledge of licence requirements and technical expertise ensures you achieve and maintain legal compliance with your licence or permit application.  All documentation, drawings and monitoring are carried out using our specialist in-house team and equipment. We engage with the Local Authority on behalf of the client, handling all stages of the permitting process though to Permit issue.