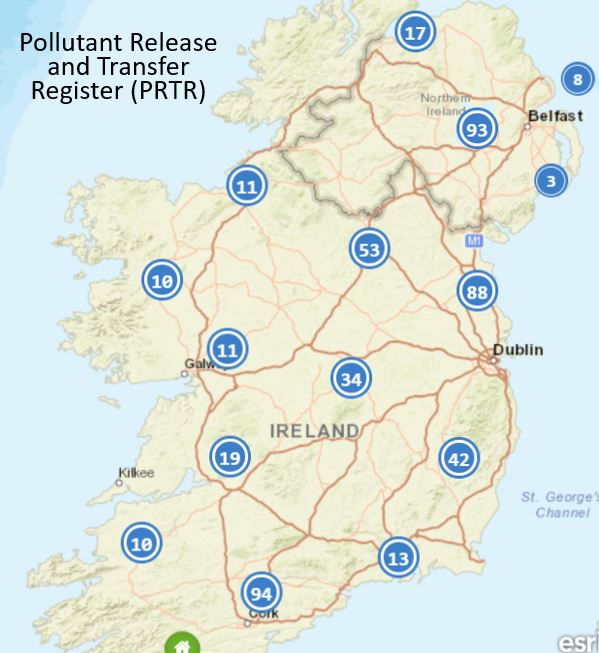 The Environmental Protection Agency (EPA) has published environmental data on Ireland’s national pollutant and transfer register. This is a public register of pollutant releases and waste transfers from large industrial activities in Ireland.  The information supports EU-wide reporting through the European Commission’s e-Register website, which contains data reported annually by more than 34,000 industrial facilities across 33 European Countries.

Covering 91 pollutants from 417 large industrial facilities in Ireland, the data indicates trends across a number of key parameters. Findings from the 2017 data include:

Patrick Geoghegan, EPA Senior Manager said: “The data on hazardous waste transfers indicates that the positive trend to send hazardous waste for recovery treatment, rather than disposal, continued in 2017.  However, it also highlights that Ireland has not moved significantly towards self-sufficiency. A lack of domestic infrastructure and the often more favourable cost option of treatment and disposal abroad have meant that export continues to be a significant treatment route for Ireland’s hazardous waste.”  The pollutant release and transfer register provides greater transparency among stakeholders and incentivises industry to establish clean production techniques and pollution abatement equipment to reduce emissions.

Pollutant Release and Transfer Register (PRTR): The data contained within the Register does not present an assessment of environmental performance at any particular facility, nor does it assess the impact of reported emissions on the local/national environment. EPA licensed operations are regulated and monitored by the EPA’s Office of Environmental Enforcement in accordance with licence conditions.

PRTR Regulations 2011 (S.I. No. 649 of 2011) signed into law on the 13th December 2011, established an Irish pollutant release and transfer register in the form of a publicly accessible electronic database.

The E-PRTR Regulation has a number of principal objectives, as set out in Article 1 of the Regulation:

Annex 1 of the PRTR Regulation (EC) No. 166 of 2006 lists the activities which are subject to reporting under E-PRTR.

Annex 2 of the E-PRTR Regulation lists the 91 substances that are subject to reporting under E-PRTR, above specified release thresholds.

Verde Environmental Consultants works with our EPA licenced clients to achieve compliance according to their licence conditions in the most economical way possible. We have a proven track record of successfully reducing many of our clients’ expenses in this area by securing reductions in monitoring requirements and by the easing of licence conditions where appropriate.

Our expertise in this area, combined with our local knowledge, has been of assistance to clients in better managing their IE/IPC licence requirements and to this effect we also enclose a brochure giving some additional information on the range of services we provide.