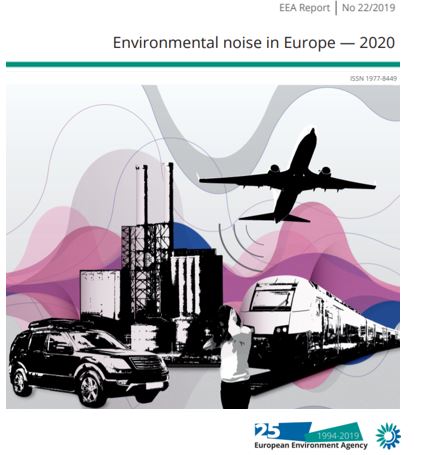 Noise pollution is a growing problem across Europe and one which many people may not be aware of the impacts of on their health. The European Environment Agency’s environmental noise expert, Eulalia Peris discusses the key findings of the EEA report ‘Environmental noise in Europe — 2020’, published in March.

The report shows that environmental noise, and in particular road traffic noise, remains a major environmental problem affecting the health and well-being of millions of people in Europe. Twenty percent of Europe’s population are exposed to long-term noise levels that are harmful to their health. That corresponds to more than 100 million people within Europe. The data also suggests that policy objectives on environmental noise have not been achieved. In fact, based on our projections, it is unlikely that the number of people exposed to noise will significantly decrease in the future due to urban growth and increased mobility demand.

Long-term exposure to noise can cause a variety of health effects including annoyance, sleep disturbance, negative effects on the cardiovascular and metabolic system, as well as cognitive impairment in children. Looking at the current data, we estimate that environmental noise contributes to 48,000 new cases of ischaemic heart disease a year as well as 12,000 premature deaths. In addition, we estimate that 22 million people suffer chronic high annoyance and 6.5 million people suffer chronic high sleep disturbance. As a result of aircraft noise we estimate that 12,500 school children suffer reading impairment in school.

Many people don’t realise noise pollution is an important problem, impacting human health, including theirs. Of course, there are many more premature deaths associated with air pollution than for noise. However, noise seems to have a larger impact on indicators related to quality of life and mental health. In fact, according to some World Health Organization (WHO) findings, noise is the second largest environmental cause of health problems, just after the impact of air pollution (particulate matter).

In some countries, there is still a high percentage of data missing in terms of noise maps and action plans. Noise problems cannot be properly evaluated and addressed if countries, regions and cities don´t produce the noise maps or the action plans required by the directive.

The EEA is in charge of gathering all the information that countries submit under the Environmental Noise Directive. The current state of knowledge on noise sources and population exposure in Europe is largely based on this database. We produce a number of reports and assessments based on this data. They help track the progress made towards meeting noise pollution objectives and can also inform the development of future environmental action programmes. Apart from the recently published Environmental Noise in Europe report, there are a number of previous reports on noise undertaken by the EEA, such asQuiet areas in Europe — The environment unaffected by noise pollution (2016),Unequal exposure and unequal impacts: Social vulnerability to air pollution, noise and extreme temperatures in Europe (2018). People can also check the noise pollution information through the EEA noise viewer or the country fact sheets on noise.

Countries, regions and cities are taking a variety of measures to address noise problems. For instance, installing low noise asphalt on roads, using quiet tyres in public transport vehicles, putting more infrastructure for electric cars in cities, promoting active travel like walking or cycling, pedestrianisation of streets, etc. A significant number of cities and regions have also put in place so-called quiet areas, where people can go to escape city noise. These are mostly green spaces, like parks or nature reserves.

Many of these measures have also proved to be beneficial for reducing air pollution. We see that a way to increase the impact of noise mitigation measures while optimising costs and efforts could be to design combined strategies for mitigating noise and air pollution from traffic. If noise measures are not implemented to address noise problems, it is unlikely that the number of people exposed to noise will significantly decrease in the future due to urban growth and increased mobility demand. A significant reduction of people exposed to harmful noise levels is more likely to be achieved by using not only single measures but a combination of different measures including technological improvements, ambitious noise policies, better urban and infrastructure planning, and changes in people´s behaviours.