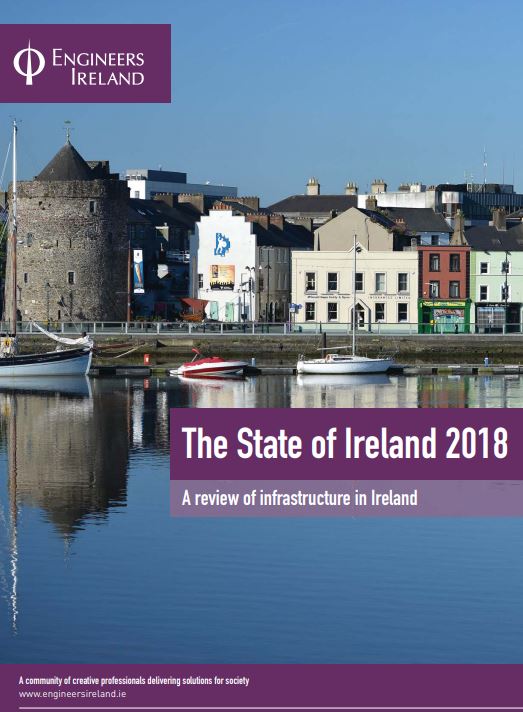 Engineers Ireland launched their ‘State of Ireland 2018 – A Review of Infrastructure in Ireland‘ report yesterday which was carried out by two expert advisory panels made up of 40 engineering experts, in conjunction with a survey of 1,000 Chartered Engineers across Ireland.

The report found that only 20% of engineers in Ireland think the country’s water and wastewater systems are in good condition with capacity for future development.  The current network of water and wastewater assets is very fragmented and some elements date back to the 19th century.  “We have particular concerns for the discharging of untreated effluent, levels of leakage from the mains supply network, compliance in the private water and wastewater sector and the capacity to meet future demand,” the report states.

One of the areas the report focuses on is:

Groundwater, meanwhile, is all water below the surface of the ground in the saturation zone and in direct contact with the ground or subsoil. Groundwater provides approximately 20-25% of drinking water supplies. The major causes of reduced water quality include pollution from agriculture, urban wastewater (sewage and runoff), domestic wastewater and changes to the aquatic environment as a result of peat extraction, invasive species etc. Protecting water from contamination at its source helps to ensure a safe supply and to reduce treatment costs.

The aim of the WFD is to protect / enhance all ground and surface waters (such as rivers, lakes, transitional waters and coastal waters) and their dependent habitats and wildlife. All waters must achieve ‘good status’, based on biological, hydromorphological, physical-chemical and chemical quality. The figure below shows the ecological status of surface water bodies and groundwater based on monitoring carried out by the EPA between 2010 and 2015.

While the vast majority of monitored groundwater and coastal waters are regarded as good, a large proportion of rivers, lakes and transitional waters have yet to be restored to good status. Overall, levels of pollution have remained relatively constant since the beginning of the 1990s. However, there has been a substantial loss in the number of sites where the highest quality waters are found. For example, between 2013 and 2015, 21 rivers were classified as the highest quality, compared with 575 between 1987 and 1990. This is an area where substantial effort is required to protect the few remaining highest quality rivers and return impacted ones, where feasible, back to their earlier high quality.

Another element of the WFD is the introduction of river basin districts – previously, water resources were not managed on a catchment basis. River Basin Management Plans (RBMPs) set out the measures aimed at protecting and enhancing the quality of water resources by identifying the pressures on water bodies at risk of not meeting the objectives of the WFD. The RBMPs prioritise water bodies and coordinate actions between a variety of stakeholders. Ireland’s first RBMP covered the period 2009- 2015, when separate plans were prepared for each individual river basin district. The second RBMP, which was published in April 2018 and covers the period 2018-2021, takes a new approach to river basin management planning. Ireland is now taking a single river basin district approach with a much improved evidence base and public engagement to underpin decision making, at both national and local level. The Irish River Basin District covers the area of the Republic of Ireland in 46 catchment management units, including 583 subcatchments with 4,832 water bodies. Cross-border collaboration will be required to ensure the effective implementation of the RBMP.

The expected outcomes of the RBMP are:

Some of the RBMP measures are discussed in more detail in other sections of this report, including: drinking water source protection, wastewater treatment and public engagement on sustainability.

The land area that contributes water to a well or spring is known as the Zone of Contribution (ZoC). The ZoC is delineated to define the approximate area contributing to the abstraction point. Meanwhile, the Source Protection Zone (SPZ) additionally shows the risk of contamination to groundwater within the ZoC of a source.

This information should be used to manage and control activities which have the potential to impact on the quality of water to be abstracted for drinking water. SPZs take into account vertical and horizontal water (and possible contaminants) movement within the ZoC towards the point of abstraction. Another critical aspect that needs to be considered is the risk of contamination directly at the point of abstraction due to inadequate borehole construction.

Article 7 of the WFD requires Member States to provide the necessary protection for waters used or to be used for drinking water and Member States may establish ‘safeguard zones’ for those bodies of water, which are in effect the catchment area for the water supply. The SPZs could be considered as the basis for these safeguard zones in the future.

However, information regarding source protection is currently inadequate – there is a need to delineate SPZ/ZoCs. Supplies that have full SPZ reports can make informed decisions on catchment management (dealing with microbial and chemical contaminants). Supplies that will be retained as an asset, but without any SPZ/ZoC, need to have the work undertaken. Existing ZoC reports should be upgraded to full SPZ reports. For public supplies, groundwater SPZ/ZoC status is currently poorer than surface water (from which most public supply is abstracted). A work programme of enhancing the quality of these supplies should be based on priority actions for the most urgent cases, such as the largest and most vulnerable supplies, which is identified through the production of SPZ/ZoC reports.

For GWSs, existing ZoC reports are medium confidence in most cases (due to smaller size and population). GWSs should consider full SPZ / extra hydrogeological work for more complex (e.g. karst) and / or large schemes with unknowns. All GWS ZoC work should be completed by the end of 2018 (including any follow-on work such as tracer testing etc). Actions, such as wellhead protection, should be progressed in collaboration with the NFGWS. For domestic (individual) supplies, it is not realistic to have bespoke SPZ/ZoCs, but they should have adequate wellhead protection, including grouting to mitigate localised contamination, which generally does not exist.

The construction of future domestic supplies should comply with IGI guidelines and EPA advice. Also, other activities need to record well locations during planning phases, which is not consistently happening. There are currently many water supply zones which fail to meet the European and Irish Drinking Water standards for microbiological and chemical parameters or have significant operational, maintenance or capacity problems at individual treatment plants, giving rise to water quality risks. This includes customers who have a Boil Water Notice due to microbiological contamination in their water supplies.

For groundwater source protection, it is absolutely essential that boreholes and wellheads are properly constructed, that pollutants are prevented from entering the well and that it is protected against flooding, other accidental damage and vandalism. Hydrogeologists need to be included at all stages of groundwater abstraction development and SPZ delineation – this has been lacking in the past. Hydrologists and other environmental scientists are likewise critical for the sustainable abstraction and management of surface water resources.

Improve the protection of human and environmental health by providing groundwater and surface water Source Protection Plans for all viable supplies and upgrade wellheads and abstraction points where deficiencies are immediately apparent. Expand research and application of sustainable water resource management.

Implement effective land use management plans within catchment areas to mitigate the risks of contamination occurring, which should dovetail and be in conjunction with the work to achieve EU Water Framework Directive compliance. Fully assess the environmental sustainability of existing abstractions in the context of likely future water demand and adopt a sustainable approach to water abstraction by, for example, amalgamating inefficient water supply schemes into more appropriately located and efficient schemes. 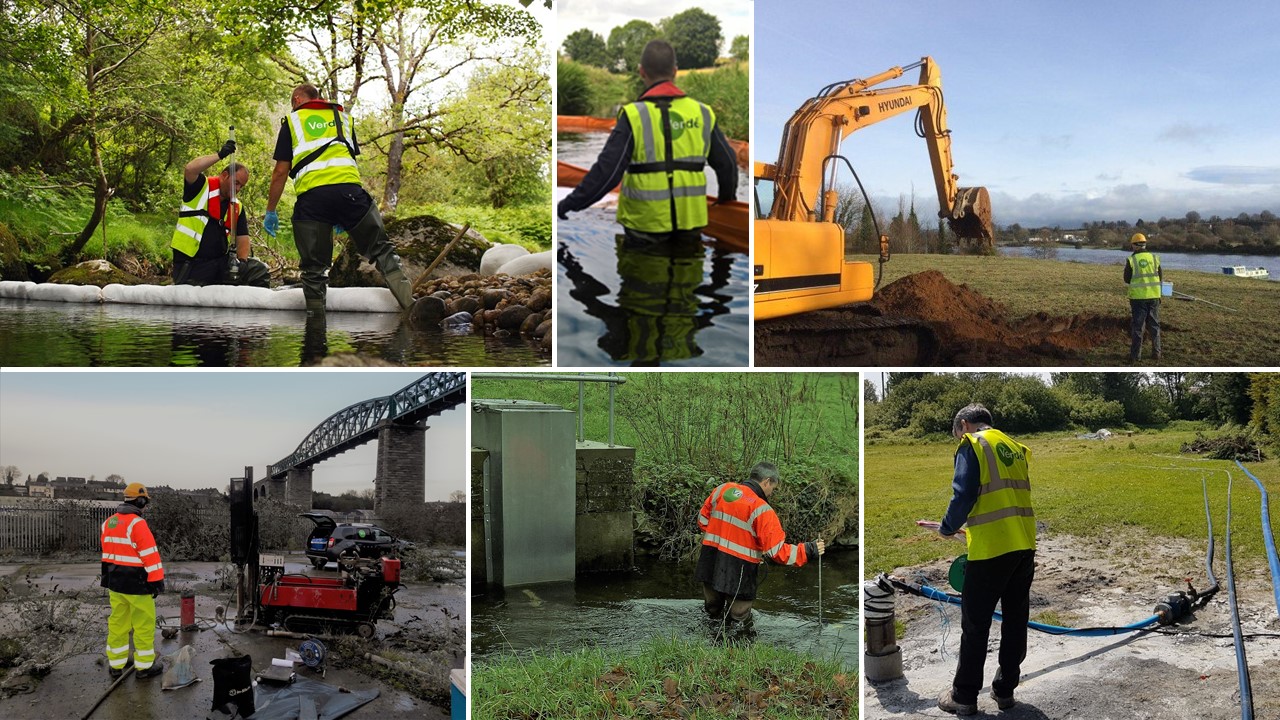 Verde Environmental Consultants has built a team of water resource assessment specialists who are focused on delivering quality hydrogeological services such as: