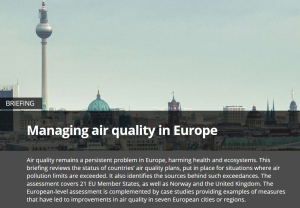 From 2014 to 2020, just under two thirds of all reported exceedances of air quality standards were linked to dense traffic in urban centers and proximity to major roads, mainly due to emissions of nitrogen oxides (NOx). Road traffic was a key source of air pollution in western and northern Europe, with six countries, namely Austria, Denmark, Finland, the Netherlands, Portugal, and the United Kingdom*, reporting road traffic as the only source of exceedances.

In contrast, in southern and eastern Europe domestic heating was an important source driving exceedances of standards for PM10. Countries that reported domestic heating as a significant driver of exceedances include Croatia, Cyprus, Bulgaria, Italy, Poland, Romania, Slovakia, and Slovenia.

In terms of measures put in place to reduce emissions under air quality plans, two thirds focused on reducing emissions of NOx from the transport sector, while only 12% focused on domestic heating and 4% on the agricultural sector, the latter two being important sources of particulate matter.  According to the EEA report ‘Air quality in Europe 2021’, exposure to air pollution caused a significant burden of premature death and disease in the 27 EU Member States in 2019, with 307,000 premature deaths attributed to fine particulate matter and 40,400 to NO2.

Under the European Green Deal’s Zero Pollution Action Plan, the European Commission set the 2030 goal of reducing the number of premature deaths caused by PM2.5 by at least 55% compared with 2005 levels. To this end, the European Commission committed to revising relevant policies that reduce air pollutant emissions at source, such as from road transport and buildings. The Commission is also revising the Ambient Air Quality Directives to align EU air quality standards more closely with  new WHO air quality guidelines published in September 2021.

The EU’s ambient air quality directives set air quality standards for certain pollutants in ambient air to protect human health and the environment. If these values are exceeded, Member States are required to take necessary action to reduce the concentrations of air pollutants and prepare an air quality plan that sets appropriate measures. The aim is to keep the exceedance period as short as possible.