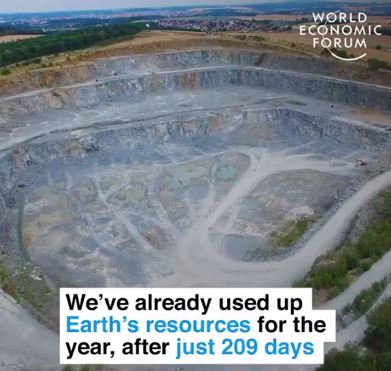 On Monday, July 29, we will be 209 days into the calendar year. And we will have used up all the resources the Earth could regenerate in 365 days.  At least, that’s according to the Global Footprint Network, a group that uses an array of mostly United Nations data to calculate what it calls Earth Overshoot Day: the day when humanity overshoots the planet’s ability to recover from what resources we consume within each year—like regrow the trees we cut down, absorb the carbon dioxide we emit, and replenish the seas with the fish we harvest, to name a few. At this rate, it would take 1.75 Earths to sustainably meet the current demands of humanity, according to the available data.

It’s a useful visualization. But here’s the most sobering part: Earth Overshoot Day is probably a vast underestimation of the actual level of unsustainable planetary wreckage, and the scientists behind the numbers are the first to admit it.

David Lin, the chief science officer of the Global Footprint Network, likes to use the analogy of a bank account: If you have $100 in the bank and spend $200, that puts you in the red. You’ll have a deficit of $100. If you keep living like that, spending what you don’t have, eventually you’ll be in trouble. It’s not a sustainable way to live.

Currently, it would take 1.75 Earths to support humanity sustainably.

Each year, the human population grows. We consume more natural resources than the planet can regenerate in a year, and emit far more carbon dioxide than our forests and oceans can possibly sequester. Thus, our deficit grows. We fall further and further in the red. Last year’s Earth Overshoot Day was Aug. 1, three days later than this year’s. The date has crept up by two months over the last 20 years.

The Overshoot Day calculation relies heavily on an array of country-level and global UN data about everything from the food produced and consumed in each country to how much waste is generated, timber is felled, and fossil fuels are burned. The calculation is limited by the quality of the global data, which in itself might have some big underestimations built in. Research has suggested that the UN Food and Agriculture Organization might be underestimating the size of the global seafood harvest by 30%. But the UN numbers are the best available, for now, so that’s what they use.

“What we do is very much accounting,” said Lin, one of four researchers who spend six months each year crunching the numbers. “Everything we consume, and all the waste we produce—we can map back over how much bioproductive area it would require.”

They calculate individual overshoot days for each country, too; the US’s overshoot day was way back on March 15. Australia’s was March 31. Qatar’s was Feb. 11.

If the world’s population consumed natural resources and produced waste at the rate that the US does, it would take five Earths to sustainably meet those needs.

Each country has an Overshoot Day of its own, according to how many resources it consumes and how much waste it produces each year, versus the bioproductive space available.  It’s a striking figure. But the truth is that it probably barely scratches the surface. Earth Overshoot Day does not, for example, take into account soil degradation, or water contamination, or mass species decline—because it isn’t designed to do that. It is simply a calculation of some inputs and outputs as they are now, and not how much resources might be depleted by human activity in the future. Ecological damage that doesn’t impact humans isn’t reflected here, either.  “It frequently gets misunderstood,” Lin says. “People think it’s this sustainability indicator of everything, which it isn’t. Because no such thing actually exists. It’s theoretically impossible.”

The global data for those indicators don’t exist—and even if they did, scientists would have to choose a time parameter for that “sustainability.” Is it sustainable for five years? Or for 10?

Overshoot Day doesn’t take into account, for example, whether our current level of agricultural output is ruining soils for future generations, or whether the current rate of groundwater pumping will result in desperate water shortages a few years down the line. “It’s a measure of what is. Not what could be,” Lin says. It’s a snapshot of Earth’s current deficits, but the future survivability of Earth depends on a lot more than what can be captured by that. “You could sell your organs for money, and your bank accounts that year might look okay, but that’s not sustainable,” Lin says.

It’s safe to say the situation is a lot worse than Overshoot Day lets on. But there’s still a place for the metric as a benchmark for the bare minimum of the trouble we’re in. “In spite of these things, we are still in overshoot. And we don’t have a better global measure for looking at this. No one has suggested a better way yet,” Lin says.