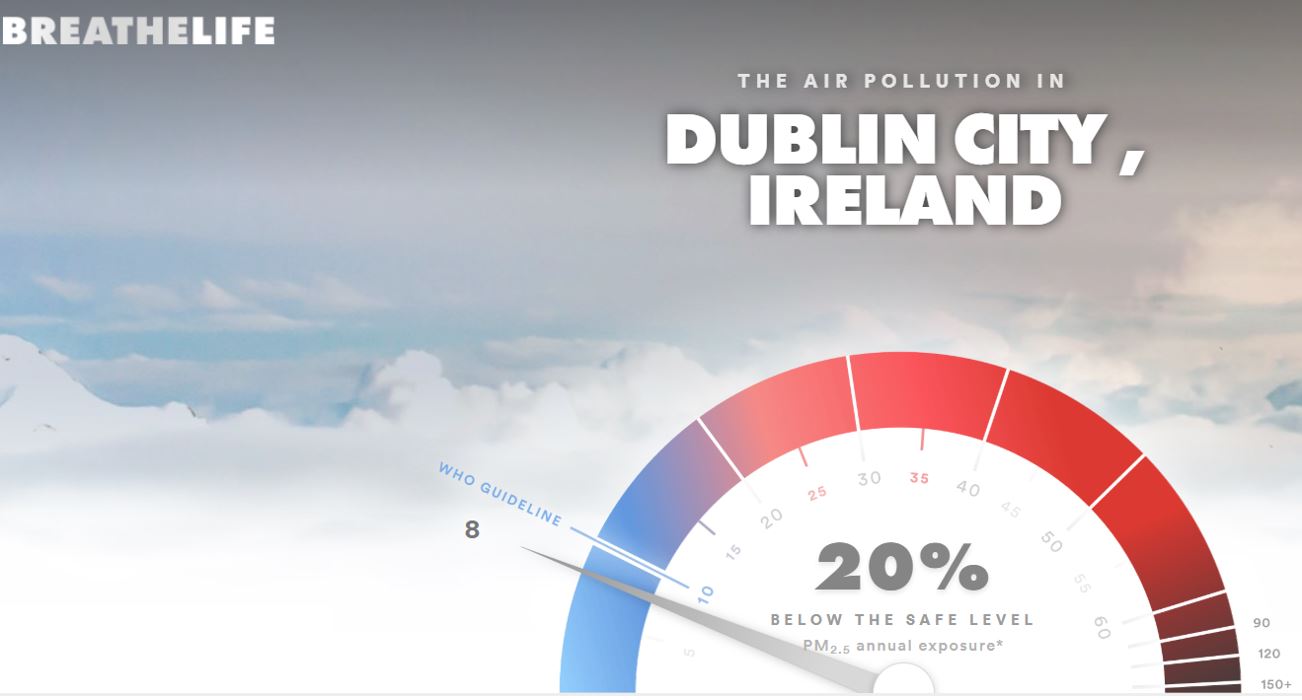 Dublin has become the first city in the country to sign up to a global campaign to improve air quality levels by 2030.  The region’s four local authorities have backed the BreatheLife campaign in what has been described as a “rare joint pledge”.   Dublin’s Deputy Lord Mayor, Tom Brabazon told RTÉ News the city has to take action now to protect the health of citizens.  ”All you have to do on a calm summer’s day is to go up to the Three Rock mountain and look down at the brown haze over the city,” he said.  “This is affecting people’s respiratory functions. We have huge numbers of asthma sufferers.”

Dublin is one of 76 cities and regions around the world to sign up to the initiative. The aim is to meet World Health Organisation (WHO) air quality guideline values within a decade.  The four local authorities will pool resources to tackle climate change and improve the quality of life for residents in the capital.  ”I call on all residents in the Dublin region to be ‘Climate Brave’ as we implement programs and take the necessary decisions to reach the BreatheLife campaign targets,” said the Mayor of Fingal, Cllr Eoghan O’Brien.

Speakers at the launch at Dublin’s Mansion House included Dr Maria Neira from WHO. ”There is a commitment to reduce air pollution and this means protecting the health of the people and will inspire others,” Dr Neira told RTÉ News. ”This is the beginning of something that will result in plenty of health benefits for Irish citizens.”

WHO estimates that 92% of people around the world breathe air which falls short of recommended guidelines. ”If we look at the European countries there are 400,000 deaths every year [caused by air pollution]. So, there is a lot we need to do,” Dr Neira added.

Sixteen-year-old Beth Doherty took a keen interest in the launch of the new campaign. The climate activist said it is time to change how the city functions.  “We need better public transport and infrastructure, retrofitting of homes to make them more energy efficient, and we need to be looking at structural changes that target the real roots of the issue – industry and agriculture – and not just focusing on individual actions,”  Ms Doherty said.

Dublin’s local authorities have warned that in order to hit the targets some unpopular decisions will have to be made.  For a start, more road space will be allocated to walking, cycling and public transport.  ”Hopefully the fleet will have eliminated the use of fossil fuels by 2030,” said Deputy Lord Mayor of Dublin Tom Brabazon.  “Hopefully we’ll see a lot more people walking or commuting in other ways than through carbon, fuel guzzling methods,” he added.