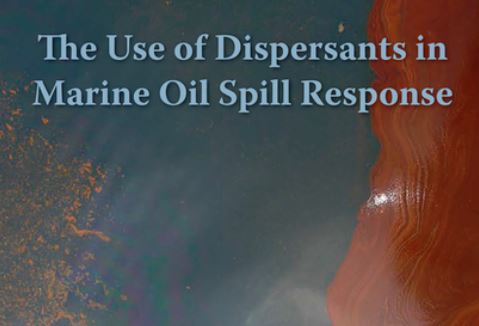 A new report from the National Academies of Sciences, Engineering, and Medicine examines the effects and efficacy of using dispersants in marine oil spill response. Dispersants reduce oil at the water’s surface by promoting the formation and diffusion of small oil droplets that may biodegrade more readily.  Field and modeling studies show that dispersants can be a useful tool for oil spill response, says The Use of Dispersants in Marine Oil Spill Response. Dispersants can reduce the amount of surface oil, thereby reducing response personnel’s potential exposure to hazardous compounds in oil and lessening the extent of surface oil encountered by marine species.  Dispersants may also reduce the fouling of shoreline habitats by reducing the amount of surface oil that is blown ashore.

Every oil spill presents unique circumstances and challenges, the report notes, and dispersants are one of a variety of options – each with advantages and disadvantages — available to responders as they work to contain and clean up a marine oil spill. Other response options include mechanical recovery of the oil using skimmers and booms, burning of the oil, and monitoring of the environment to assess how it recovers naturally over time.

In evaluating trade-offs and making choices about dispersants and other response options, decision-makers should use Net Environmental Benefit Analysis (NEBA) tools to assess the comparative environmental benefits and drawbacks of various options. The NEBA tools should be expanded to address the health of response personnel, community health, and socio-economic impacts of various response options as well.  The report also stresses the importance of transparency in cases where dispersants are used. Real-time information on dispersant use and up-to-date health risk information or guidance should be publicly available.

Protecting human health and safety is the first priority when making decisions about oil spill response. Volatile organic compounds in oil create a risk to response personnel through inhalation of these toxic components, which are also highly flammable. Dispersants may be used to decrease these hazards by reducing the volume of floating oil in the vicinity of response operations. However, questions have been raised about whether dispersants themselves pose health risks, and the report examines the available evidence on this issue.

While two studies examined the health effects of dispersants on responders after the Deepwater Horizon spill, and reported respiratory and skin irritation, drawing conclusive results from those studies is hindered by delays in collecting health information combined with a reliance on self-reporting, the report says. These limitations make it difficult to accurately estimate workers’ exposure to dispersants and therefore to untangle the effects of dispersants from the effects of oil and of dispersed oil.

In advance of the next significant oil spill, the requirements for details gathered during injury and illness reporting for worker health and safety should be improved, with a clear focus on whether workers were exposed to dispersant, the report says.  Concentrations of a common dispersant component — dioctyl sodium sulfosuccinate (DOSS) — were measured in fish and shellfish tissue during and following the Deepwater Horizon spill, and were found to be low or non-detectable, suggesting negligible human health risk associated with dispersant exposure from eating seafood, the report says.  The report notes that health impacts of oil spills in both workers and community members likely are at least partly dependent on the duration of the recovery period from the oil spill. If dispersants shorten the duration, presumably overall impacts on worker and community health would lessen. This factor should be included as part of trade-off considerations as decisions are made about dispersant use.

Oil can present an immediate hazard to ocean life, both at the surface and below. At the surface, oil can harm animals such as seabirds, turtles, and marine mammals through physical smothering, ingestion, inhalation, and aspiration of oil. Dispersants have been used in part to reduce these hazards of surface oil. However, the action of dispersants increases the amount of oil in the water column, where fish and other species below the water’s surface may be exposed through ingestion or absorption.

A key question has been whether dispersed oil is more toxic to marine life than oil alone. Concerns over the substantial use of dispersants during the Deepwater Horizon spill triggered an expansion of research on the toxicity of oil, dispersed oil, and dispersants, the report says. The results of laboratory studies that have looked at the toxicity of oil and oil treated with dispersants have been unclear, at least in part due to a lack of consistency in methodologies, despite recommendations by a previous National Academies report to employ standardized toxicity testing protocols. The report recommends a standard methodology that better accounts for the toxicity of individual oil and dispersant components.  The current lack of consistency in toxicity testing protocols has reduced the ability to compare results across studies and develop a comprehensive picture of the toxicity of oil and dispersants. Funding agencies, research consortia, and other sponsoring groups should require that research teams use standardized toxicity testing methods, the report says.

Data from recent toxicity tests that employ the suggested method indicates that the influence of dispersants on oil toxicity depends on the concentration of oil in the water: At concentrations below approximately 100 mg oil/L, the toxicity of chemically dispersed oil is comparable to that of untreated oil. However, at concentrations above approximately 100 mg oil/L, dispersants appear to increase toxicity. Oil levels measured during spills are typically well below 100 mg oil/L, the report notes.  The report says that in making choices about dispersant use, it is important to recognize the hazards due to the toxicity of the oil itself. Unmitigated floating oil slicks pose a significant hazard to wildlife, especially animals found at the ocean surface where they come to rest, feed, or breathe. Decisions on dispersant use should consider the risks posed by oil relative to the risk of dispersed oil.

The study — undertaken by the Committee on the Evaluation of Chemical Dispersants in Oil Spill Response — was sponsored by the Gulf of Mexico Research Initiative, National Academies’ Gulf Research Program, Bureau of Ocean Energy Management, U.S. Environmental Protection Agency, American Petroleum Institute, and Clean Caribbean and Americas. The National Academies are private, nonprofit institutions that provide independent, objective analysis and advice to the nation to solve complex problems and inform public policy decisions related to science, technology, and medicine.