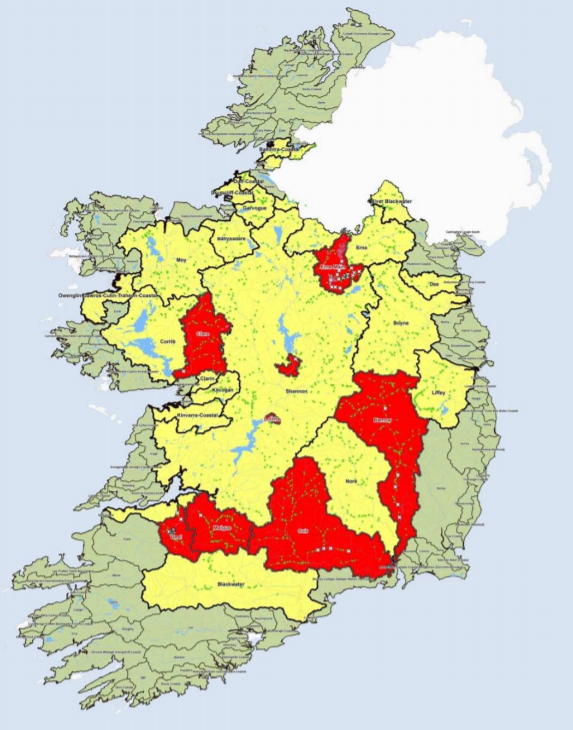 The following is a list of the rivers where outbreaks of Crayfish Plague have been confirmed by diagnostic tests. The map accompanying this information note shows the affected catchments in red and the locations of mortalities or positive tests using environmental-DNA indicated by the star symbol.

The disease is likely to have moved and any site within the coloured catchments should be treated as high risk. A more detailed version of the map is available from the web page given above and here https://maps.biodiversityireland.ie/Map/Terrestrial/Species/17487

The advice is that strict biosecurity is observed when working in all these catchments. The highest level of risk is moving equipment that has been used in an affected area to an unaffected catchment. The Crayfish Plague disease organism (a water-mould Aphanomyces astaci) is microscopic and invisible to the naked eye and is only viable in water. It is completely harmless to people, pets, livestock and all other freshwater organisms. The presumption should be made that any equipment which becomes wet and has been used in an affected catchment will be contaminated and there is a potential for spreading the disease to new sites.

The NPWS can also confirm that a population of a non-indigenous crayfish species (NICS) has been found for the first time in the wild in Ireland. There has always been a concern that a NICS may become established in Ireland and this has now been confirmed by the discovery of a population of an Australian Crayfish, the Yabby, Cherax destructor. NPWS are working at the site to assess the size of the population. The location is not being disclosed at this time.

If Crayfish Plague is suspected please contact NPWS, the National Biodiversity Data Centre or the Marine Institute who will advise on actions to be taken.

Ideally do not enter rivers which are potentially contaminated but if you do, Check-clean-dry should be used to decontaminate wet equipment BEFORE using it again in another river.