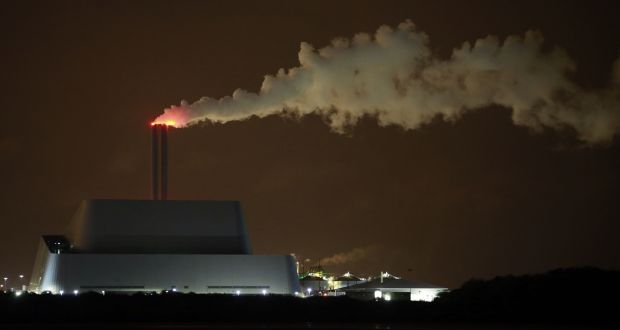 There is one irrefutable assertion that applies to large, modern incinerators: they are ferocious consumers of raw materials. In the case of Covanta’s “waste to energy” plant in Poolbeg, Dublin, it’s consuming 1,800 tonnes of solid waste per day.

Covanta is seeking talks with An Bord Pleanála on the potential to burn an additional 90,000 tonnes of waste annually at the plant. The incinerator, which opened last year, is licensed to burn 600,000 tonnes of waste each year, under the terms of planning permission granted in 2007.

It has quickly built up the processing of waste. Before it opened its doors, the US waste firm said it had already secured contracts with waste collectors to take 540,000 tonnes of waste. Last December, it announced it was operating at “full capacity”.

Covanta, trading as Dublin Waste to Energy Limited (DWtE), is seeking “pre-application consultations” with the board for a “proposed amendment” to increase annual capacity of existing waste by 15 per cent. If granted, it will have to secure Environmental Protection Agency approval for a revised operational licence. It’s profit-driven; the need to maximise ‘efficiency’ while securing payback for the €350 million facility. “DWtE are always seeking to optimise the performance of the facility and are looking to the future, particularly the additional requirements for district heating,” a spokeswoman said.

It is fulfilling its waste-to-energy remit by generating electricity – equivalent to supplying up to 80,000 homes annually – which is fed to the national grid. A district heating provision, when realised, will supply heat to 50,000 local homes. Development of a district heating network is the responsibility of Dublin City Council (DCC) but DWtE says it’s ready to supply the heat “whenever DCC develops it out”. DCC is working on the district heating project to deliver it over the next couple of years.
Covanta’s latest move has provoked concern among local residents, environmental groups and those in the recycling business. In short, it’s profit-driven; the need to maximise “efficiency” while securing payback for the €350 million facility built in partnership with Dublin’s four main local authorities.  Any increased capacity, Covanta insists, would involve using waste from its existing customer base – so there’s no shortage of material. Some 67 per cent of the waste treated arises within the four Dublin Local Authority areas. This is mixed municipal waste from households and businesses.

Ireland’s recycling record had been improving but a large incinerator inevitably derails that ‘as everything has to go into it’. A further 15 per cent comes from the remainder of the Eastern and Midlands Waste Region, while 18 per cent comes from elsewhere within the country, from the two other waste regions. The company says, “there is no long-term plan to import waste”.

Speaking as a local resident, former minister for environment and Green TD John Gormley says the 600,000-tonne capacity should never have been granted in the first place, as “it’s way too large for the area involved”. This is confirmed by the number of daily truck movements now accessing the plant via the East Link Bridge which, combined with increased Dublin Port activity, is giving rise to air-pollution concerns, he adds. Residents having fought the good fight have greeted the move with resignation and disappointment. Any move to increase capacity should be rejected, Mr Gormley believes, while “authorities including the EPA must ensure the highest possible environmental standards are observed” with existing operations.

Ireland’s recycling record had been improving but a large incinerator inevitably derails that “as everything has to go into it”, he points out. It remains “an end-of-pipe solution” when Ireland will have to meet the stringent requirements of a circular economy by dealing with all of its waste sustainably.

EPA figures show Ireland generated 2.62 million tonnes of municipal waste in 2104 (the most recent verified figures) – 536,000 tonnes of which went to landfills. Even at that point, treatment processes generating fuel (through incineration and co-incineration) were already taking off. The Poolbeg plant in the meantime is processing vast quantities of “managed municipal waste”.  If in any event Dublin reaches its recycling targets in the next five years it will produce less than 200,000 tonnes of residual waste annually. A big question remains: where is all the extra waste needed to serve the plant going to come from?