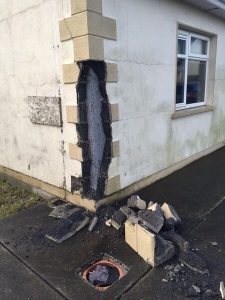 Cost of pyrite remediation scheme to hit €150m by year-end

More than €150m will have been spent on the pyrite remediation scheme by the end of 2021, according to the minister for housing. The scheme was established in 2014 to remediate dwellings that have been significantly damaged as a result of pyritic heave caused by the swelling of hardcore underground floor slabs. Such damage can manifest as cracks in concrete floors or walls, bulging walls, and doors not shutting.

New figures issued by the minister, Darragh O’Brien, to Sinn Féin TD Eoin Ó Broin show that some €125m was spent on the scheme from 2014 to 2019.  Last year, the amount spent declined due to the impact of Covid-19, but a total of €33m is expected to have been spent over the period of 2020 to the end of 2021. It was estimated that, under the scheme, 200 houses or homes would be worked on in 2020, and a further 300 are expected to have works completed in the coming year.

According to Mr O’Brien, €20m was provided under Budget 2020 to cover the implementation of the pyrite remediation scheme. However, due to the impact of Covid 19 restrictions on works, the final expenditure for 2020 was €13m.  It was expected that in the region of 200 properties would be worked on in the calendar year. However, it is understood that due to Covid this figure may change.  Mr O’Brien confirmed that final figures for 2020 will be available soon. Some €20m has been allocated for the scheme this year, a figure which should allow works to be completed on 300 dwellings but, as with all construction works this year, this is subject to potential Covid-19 restrictions.

Initially, the scheme was established to aid owners of affected dwellings in Kildare, Meath and Offaly, as well as premises in the local authority areas of Fingal County Council, Dublin City Council, Dun Laoghaire-Rathdown or South Dublin. In 2020, an extension of the pyrite remediation scheme to include the administrative area of Limerick City and County Council.  Last year, Mr O’Brien visited the 2,000th property to be remediated under the scheme, which was a home in Balbriggan, Co Dublin.

The structural engineer first carries out a survey of the property and identifies sample locations for testing. They then engage Verde Remediation Services to undertake:

This report forms an integral part of the application for funding under the Government scheme.

If you are worried about possible pyrite or mica damage at your property, an Overview of Defective Concrete Blocks Grant Scheme can be viewed here.