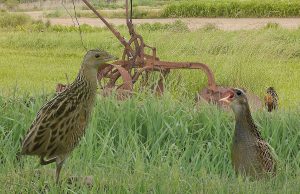 Corncrake call out to Ireland to nurture our ailing environment

Once the call of the corncrake used to herald the arrival of spring, but today numbers are fading fast, having declined 85% since the 1970s.  There are now only 151 breeding pairs in total along the north coast and west of Ireland. Recent Eurobarometer surveys show that 93% of Irish people want to protect the environment, but ailing corncrake numbers are just one statistic suggesting Irish people need to engage more with the natural world.

“Ireland is world-renowned for its lush green landscapes, unspoiled coastal waters, rolling hills and fertile soils,” said Gerry Kiely, Head of the European Commission Representation in Ireland. “The Irish public is highly aware of the threat posed by environmental breakdown.  The environment is vital to our wellbeing. Its protection is crucial to ensure that it provides us with clean air, safe drinking water and healthy, wholesome food that commands a premium internationally, and attracts millions of visitors every year. For both the climate and the environment, the next years will be crucial.”

Ireland has been performing below the EU average with respect to carbon emissions, bathing water standards and the amount of land designated as protected areas for birds, Central Statistics Office figures show.  The EU is working with Ireland to address these shortcomings. To show what can be accomplished, the European Commission Representation in Ireland has compiled a series of Irish environmental success stories, tales of actions taking place around the country.  These stories range from tackling climate change to protecting endangered species, promoting sustainable farming techniques, cleaning up our oceans and boosting recycling.

We start with the tale of the corncrake, the first in our series of articles celebrating positive environmental actions in Ireland.  The corncrake was a very common bird when Irish poet Cathal Buidhe MacElgun wrote about it in the 18th century. And it was still common when fellow poet Thomas MacDonagh translated this Irish language poem into English in the early 20th century. The current generation still has an opportunity to save this bird, once such a common sight across the Irish countryside.  “The corncrake is unique as a breeding bird in rural Ireland and has been a part of our heritage for many generations,” says Denis Strong, Divisional Manager with the National Parks and Wildlife Service (NPWS). “We have an obligation to ensure their future in Ireland, as extinction is forever.”

The bird used to be widespread in Ireland, but there are now only 151 breeding pairs in total found along the north coast and west of Ireland, declining by 85% since the 1970s. Changes in agricultural practices and modern mechanised machinery have led to the rapid decline.

Back from the brink

Denis oversees the delivery of the Corncrake Grant Scheme (CGS), a voluntary grant scheme available for landowners with corncrakes calling on or near their land.  And since January 2020, he also oversees the new LIFE Atlantic Crex project working on conservation efforts, which will run for five years. The project aims to deliver a 20% increase in the corncrake population by 2024.

“All the core breeding areas are in private ownership, so the goal is to stop the decline by raising awareness and expanding the core areas by habitat management, working with key landowners.” “The public have also become important to this project, as they send in reports of birds heard outside the core areas.” The EU LIFE programme has ensured the future of the corncrake as a successful breeding bird in Ireland, providing €4.3m in funding to the NPWS.  “This fund is a vital lifeline and enables us to draw up long-term plans for Crex conservation. The impact of our work to date has ensured the survival of this unique breeding bird and we hope to continue this good work into the future,” said Denis.

The European Commission is committed to delivering a Green Deal for Europe: a package of far-reaching reforms and new policy initiatives to make the EU the world’s first “climate-neutral continent” by 2050. It will make the EU’s economic recovery sustainable and inclusive.  “In leading this green transition by example, we can help convince other countries to move forward with us to a safer and more prosperous future,” said Gerry Kiely.

There are many great stories north, south, east and west of the country that demonstrate the commitment of the Irish public to preserving their natural environment. The Green Deal will serve to strengthen and build on such efforts.