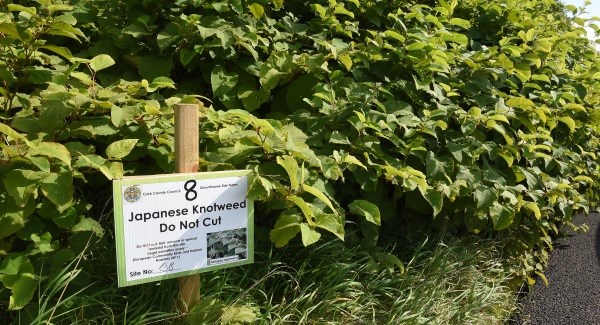 Fears have been raised that shifting Japanese knotweed around a site designated for social housing in West Cork could put nearby private properties at risk by undermining building foundations.

A Cork County Council meeting heard yesterday the invasive plant is to be moved from one part of the site, in Clonakilty, to another section where it will be entombed and sealed with plastic.  Japanese knotweed is present on the site at Lower Tawnies which is part of county council plans to construct 51 social houses at Beechgrove. A total of 36 residents at Woodview Estate, close by, made 11 submissions in relation to the project.

The knotweed issue was raised by Fine Gael’s Cllr John O’Sullivan who said he was not happy at the planned practice of relocating the invasive plant, as it could potentially cause it to spread.  He maintained doing so was creating a precedent as knotweed reportedly should be treated where it grew.  “We’re moving it to an area extremely close to a private development,” he told colleagues.  “This would set a precedent. Dealing with the issue on the site is the recommended way. Why are we putting it in a part of the land close to the private housing? This could have implications for those people who paid for their own houses.”  He was advised by officials that it was being treated “on-site” as it was only being moved from one part of the site to another.  “I have to question the thought process of moving it to a bunker close to the private estate,” replied Mr O’Sullivan.

However, the council’s chief executive Tim Lucey said: “It will be entombed below ground. We’re satisfied it will be dealt with in an appropriate manner.”  Cllr Frank O’Flynn supported Mr O’Sullivan’s view, saying he was also very concerned that moving the knotweed could spread it further and insisted it should be killed-off where it was. Removing it and burying it underground would create a precedent, he warned.  Cllr Kevin Conway agreed, pointing out that he had to spend considerable time and money ensuring the plant did not destroy his own home.  But Cllr Paul Hayes said he was satisfied that entombing the plant in a sealed unit was safe.  Mayor of County Cork Cllr Patrick Gerard Murphy said a specialist environmental report was drawn up to deal with the issue and he recommended that entombing proceed — which was eventually agreed by the majority of councillors.