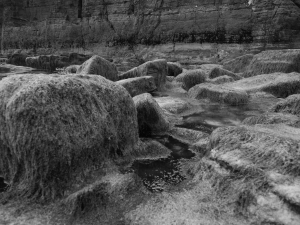 When people think about algae in rivers, pollution and eutrophication normally spring to mind.  Initiatives such as the EU’s Water Framework Directive can help us better understand the contribution of algae to our healthiest waterways.

Algae are an important part of stream ecosystems, but we often only notice them when the natural balance is upset and they can proliferate. Take a tentative step into any stream, even a crystal-clear one, and you will feel the stones that make up the bed of the stream are slippery to the touch. If you rub off a small part of this slippery surface and put it under a microscope, you’ll see that it is teeming with algae.

This little-known group constitutes 75% of all the plant species recorded from the UK – and a large part of the evolutionary diversity of all photosynthetic organisms, too.

Until the turn of the millennium, applied scientists’ interest in freshwater algae was mostly focused on the problems they caused. It was well understood that an excess of inorganic nutrients leads to accelerated growth of algae in lakes and reservoirs, and has consequences for water managers: clogged filters in water treatment works, taste and odour problems and, in particular, blooms of toxic blue-green algae (now known as cyanobacteria).

In 2000, however, the European Union’s Water Framework Directive (WFD) was enacted, bringing with it a paradigm shift in how we evaluate the quality of water. Before the WFD, we evaluated water primarily in terms of an absence of undesirable properties. The WFD turned this logic around and brought in definitions of ‘ecological status’ that focused as much on the presence of positive attributes. At the same time, it specified the groups of organisms that needed to be considered and one of these, for freshwaters, was the phytobenthos – the algae found attached to submerged surfaces.

However, faced with more than 5,000 species of freshwater algae recorded from the UK and Ireland, how do you go about doing this? Most European countries have focused on a single group, the diatoms, which would probably have been the most common type of alga. Diatoms are microscopic algae whose yellow-brown colour betrays affinities with the brown seaweeds of our coastlines and whose most noteworthy feature is a beautifully sculpted silica cell wall.  The Trophic Diatom Index provides an indication of the effect of nutrients (especially phosphorus) on stream ecology and, by calibrating these observed measurements against expected values from a subset of sites at ‘reference condition’, you have a simple measure of ecological status. A catchy acronym, DARLEQ (Diatoms for Assessing River and Lake Ecological Status) was devised.

DARLEQ and similar methods developed for the same purpose elsewhere in Europe were radical in that they present a view of the condition of algae in freshwaters that is not focused purely on negative properties. When DARLEQ identifies a stretch of river as being less than ‘good’, the WFD specifies that steps need to be taken to restore good status.

The need for results of ecological assessment methods to be understandable beyond a narrow group of specialists was one factor behind the development of a new approach: Rapid Assessment of PeriPhyton in Rivers (RAPPER). This is a quick survey method that focuses on those algal growths that can be seen with the naked eye.

Article courtesy of Martyn Kelly, freelance environmental consultant with an interest in the ecology of freshwater algae. He blogs at microscopesandmonsters.wordpress.com.  This article originally appeared in the Royal Society of Biology’s ‘The Biologist’  & reproduced in EPA Catchments Spring ’18 Newsletter

Verde has built a team of water resource assessment specialists who are focused on delivering quality hydrogeological services such as:

Hydrogeological and Appropriate Assessment at a site in Co. Kildare

Irish Distillers Pernod Ricard Ltd, Cork – Assessment of the Risk Screening in accordance with Guidance on the Authorisation of Discharges to Groundwater