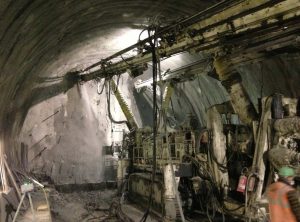 Tunnelling on a $6.7 billion Tunnel in Melbourne, Australia has been delayed due to the discovery of soil contaminated with chemicals including asbestos and PFAS.  The project is now facing potential cost blowouts, as the state government, joint-venture builders CPB Contractors and John Holland, and Transurban scramble to find a way to store, transport and clean the contaminated soil found at the site in Melbourne’s industrial west.

Two 450-tonne tunnel boring machines were lowered at a launch site in August, but sources say they have not moved due to the contaminated soil issue.  Government officials have been locked in meetings with representatives from the Environment Protection Authority, the builders and landfill operators in recent weeks to try to find a solution to the problem.

The West Gate Tunnel, a Transurban toll road set to open by 2022, will link the West Gate Freeway in Spotswood and CityLink in Docklands.  Transurban executive Wes Ballantine said the project’s managers were still working out how to deal with the contaminated soil.  “The project’s two tunnel boring machines are on site and assembly and commissioning is progressing while the project parties finalise preparations for spoil [waste material] management,” he said.

Sources close to the project say the private sector players are asking the government to chip in funds to help deal with the scale of the soil problem.  A government spokeswoman said low levels of PFAS and small amounts of asbestos had been identified in the soil.  She said contaminated soil was common on urban construction projects, especially in former industrial areas.  “Transurban and its builders are working with the EPA and Worksafe to ensure contaminated soil is managed and removed safely, and soil testing is being carried out,” she said.  If the project is not completed on time, Transurban could try to recoup any loss of revenue from their builder, the spokeswoman said.

Principal Consultant at Golder Associates, Andrew Kalitsis, who investigated toxic materials around the West Gate Tunnel for the government’s Environmental Effects Statement, warned there was a high risk that chemicals such as asbestos and PFAS would be found in the groundwater and soil.  “Soil beneath the West Gate Tunnel is likely to be contaminated by substances of waste from historical industrial operations,” Mr Kalitsis warned in his submission in 2017.

Once the tunnel boring machines start digging up thousands of cubic metres of dirt and rock each day, any contaminated soil will need to be separated and safely stored on site before being transported to special waste treatment facilities.  However, the treatment plants currently do not have the capacity to handle the large amount of contaminated soil expected to come their way.  Multiple massive storage facilities may be needed to house the contaminated soil for up to three days at the plants, before it can be properly treated.  Alternatively, an enormous new landfill site could be created and lined with specific fabric to store the soil.

It comes as the Victorian Auditor-General prepares to release a report on the project next week, which is expected to criticise the Treasury Department’s handling of Transurban’s market-led proposal.

Verde Environmental Consultants are leading contaminated site management specialists, providing a breadth of consultancy and contracting services that help our clients deal with contaminated site issues, large or small. Our suite of services include everything from contaminated land assessment and monitoring, to remediation design and implementation. Verde also offer a wide range of environmental risk assessment and risk management skills in soil, water and human health to derive defensible, realistic target values for any remediation that may be required.