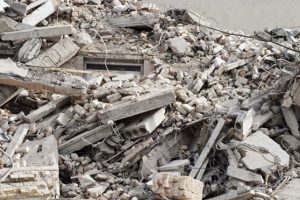 Concerns have been raised about dust pollution arising from a vast rubble mound left after the demolition of a former tax office in the heart of Cork City last summer.  The former Revenue Commissioners office on Sullivan’s Quay was demolished by BAM Property Ltd last summer to make way for a 220-bed hotel and office development.  The building housed an art studio in recent years until its demolition after which a large rubble pile was left surpassing the height of the fences around the site.

Cork residents living or working on Drinan Street that is adjacent to the site have accused BAM Ireland of jeopardising their health by ignoring their wishes to remove the debris.  Earlier this year, the delay in removing the pile of debris drew strong criticism from the then-Lord Mayor Mick Finn who called on the company to finish up its operation.

In May, BAM announced that works to remove the debris was underway. However, several locals have told The Green News that workers only flattened the rubble mound so that it would be below the height of the fence surrounding the site.

Not ideal for locals

Jim O’Sullivan, owner of River’s Edge Fitness Centre that is located beside the BAM site, said that this is not an “ideal” solution for residents and businesses on the street.  Mr O’Sullivan told The Green News that the rubble mound causes dust pollution during windy days, calling on BAM to clean up or cover the debris. “They have just levelled the dirt so that people can’t see it. But, essentially, it’s there.”  Mr O’Sullivan added that the demolition process damaged the front door to his fitness centre but that attempts to communicate with BAM had invariably failed.  “They just don’t care, especially about the people on this street, I think a little bit of public relation goes a long way, but they just ignore us,” he said.

Forough Shariati, another resident of Drinan Street, said that she is loath to open her windows during windy days so as “not to let the dust inside”.

Cork environmental activist Noreen Murphy also warned about the hazardous nature of the rubble mound for human health and the environment.  “Given the age of the [previous] building, we can safely assume that the rubble contains lead paint, fibreboard, particles, glue as well as cement,” she said.  “Failure by the Council to instruct the owners of the site to remove the rubble points once again to Cork City Council’s disregard for public health and the environment,” she continued. “[The Council] needs to stop brushing these issues under the carpet.”

Green Party Councillor Lorna Bogue told The Green News that she has been contacted the relevant authorities since last summer to no avail.  “I contacted the Health and Safety Authority about the dust pile last August, I have sent an email to follow up with them and will follow up within the Council next week,” she said.

BAM Ireland did not respond to requests for comment as to why the material has yet to be removed from the site.

A document submitted to the Council in April on behalf of BAM by the consultancy firm HW Planning states that BAM intends to resue the crushed concrete as engineered fill on other construction sites. Crushed concrete is classified as a waste product and as such its reuse as engineered fill is prohibited at present.  BAM argues that it would be more sustainable to re-use the material at other sites in Cork as the nearest licensed facility to process the waste material is in Waterford.

Removing the material and transporting it to Waterford may violate “the principles of sustainable development from a transport and waste management perspective”, the document states.  The document states that this is a “complex issue facing the entire construction industry” and that BAM was awaiting the release of new guidelines from the EPA on crushed concrete by-products.

The Construction Industry Federation (CIF) has recently called on the Environmental Protection Agency (EPA) to reclassify crushed concrete for recycling and reuse.  An updated Guidance on Soil and Stone By-products was released in June and is used by the EPA as a guide in determining if a soil and stone material can be considered a by-product on a case-by-case basis. It does not mention or list crush concrete as a possible by-product.

Earlier this summer, the EPA decided in a specific case brought by Integrated Materials Solutions Limited Partnership (IMS) that demolition concrete from the site in question will cease to be a waste material if the company complies with strict end-of-waste criteria set out by the watchdog. This ruling is valid solely for this specific project.  The document send on BAM’s behalf to the Council states that the company is waiting for the EPA to issue a national draft guidance document on crushed concrete by-products.  Pending further developments, the document states that BAM would undertake levelling of the crushed concrete fill, which took place in May.

A crisis in terms of inert soil waste disposal options could also be on the cards. There are currently only two licensed inert waste landfills in the country. There are several licensed soil waste recovery facilities in the Greater Dublin Area but few elsewhere and of course we have a plethora of sites that are permitted or certified by local authorities.

In terms of the soil waste recovery facilities, however, draft guidance on the setting of soil trigger levels suggests that it will become much more difficult to find a home for non-hazardous, inert soil material. More stringent limits are being proposed for soil recovery facilities, moving away from reliance of WAC except for in the case of licensed inert landfill facilities. It will be interesting to see what the outcome of the consultation will be and of course, to see if similar control will be assigned to waste acceptance at permitted sites.

Call in the Experts

Verde Environmental Consultants have a team of scientists and chemists with extensive experience in the soil waste classification process.  Our team help clients assess the composition of the material and determine the concentrations of the hazardous substances in the material, if present.

Our team carry out a phased approach to soil waste classification: