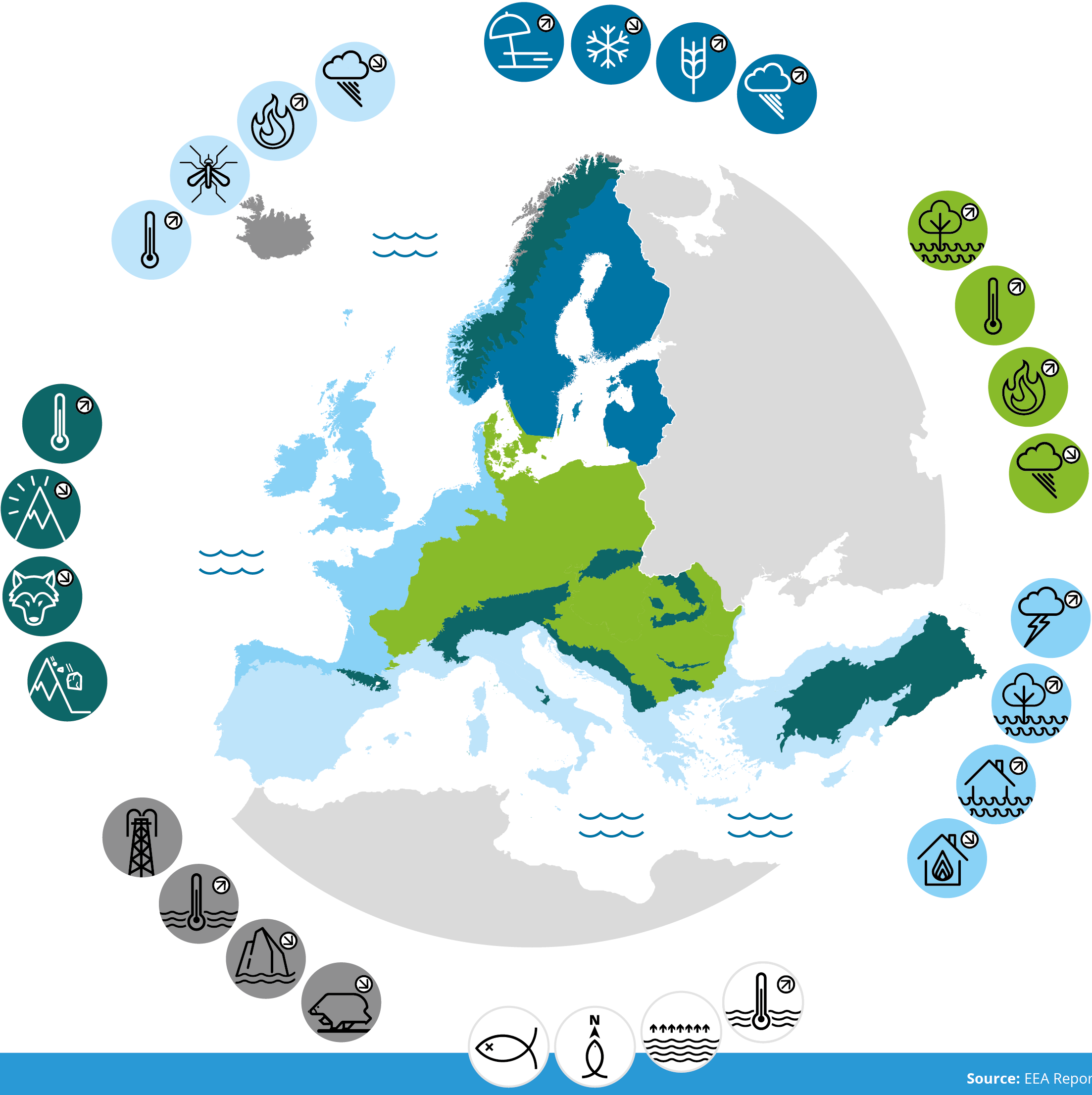 Climate change is increasing the pressure on water bodies. From floods and droughts to ocean acidification and rising sea levels, the impacts of climate change on water are expected to intensify in the years ahead.

These changes are prompting action across Europe. Cities and regions are already adapting, using more sustainable, nature-based solutions to lessen the impact of floods and using water in smarter, more sustainable ways to enable us to live with droughts.

Europe is affected by climate change and the impacts are not only felt on land. Europe’s water bodies — lakes, rivers and the oceans and seas around the continent — are also affected.

As there is more water than land covering the Earth’s surface, it is no surprise that the warming of the oceans has accounted for around 93% of the warming of the planet since the 1950s. This warming is happening as a result of increasing emissions of greenhouse gases, most importantly carbon dioxide, which in turn has increasingly trapped more solar energy within the atmosphere. Most of this trapped heat is eventually stored in the oceans, affecting water temperature and circulation. Increasing temperatures are also melting polar ice caps. As the total area of the global ice and snow cover shrinks, it reflects less solar energy back into space, further warming the planet. This in turn results in more freshwater entering the oceans, changing the currents further.

The sea surface temperatures off Europe’s coastlines are rising faster than those in global oceans. Water temperatures are one of the strongest regulators of marine life and increases in temperature are already causing big changes under water, including significant shifts in the distribution of marine species, according to the EEA report Climate change, impacts and vulnerability in Europe 2016. For instance, cod, mackerel and herring in the North Sea are migrating from their historical zones northwards to cooler waters following their food source — copepods. These changes, including the migration of commercial fish stocks, can clearly impact the economic sectors and communities dependent on fishing. Rising water temperatures can also increase the risk of water-borne diseases, for example vibriosis infections in the Baltic Sea region.

From salinity levels to acidification, more change on the way. Floods, droughts and other extreme weather on the rise.

Mitigating climate change — reducing greenhouse gas emissions — is at the heart of the EU’s policies on climate change. However, experiences and predictions of more floods, droughts, rising sea levels and other extreme weather are driving public bodies across the EU increasingly to take action to adapt to the new climate realities. Using and wasting less water is a key element of these adaptation strategies. European countries have strategies and adaptation plans in place and have conducted vulnerability and risk assessments, which will help them deal with the impacts of climate change.

Targeted EU legislation supports such risk and vulnerability assessments. The EU Floods Directive, in particular, requires Member States to identify the zones at risk from flooding along their inland waters and coastlines, factor in the projected risks of climate change, and take measures to reduce these risks.

Verde Environmental Consultants have built a team of water resource assessment specialists who are focused on delivering quality hydrogeological services such as: