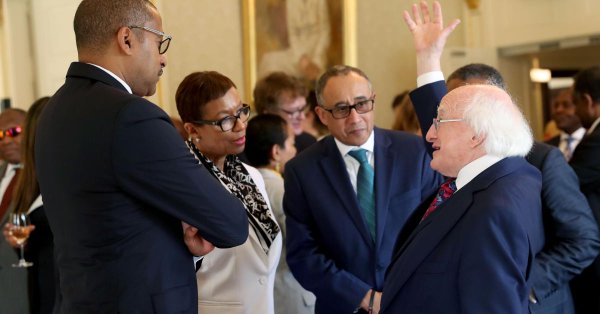 Ireland stands with small island states in acknowledging their vulnerability in a world that is in crisis – “ethically, ecologically, with widening and deepening economic inequalities”, President Michael D Higgins has said.

In an address at Áras an Uachtaráin on Tuesday to political leaders and representatives of small island developing states that are most vulnerable to climate disruption and rising sea levels, he said Ireland would stand with them “to create and implement shared solutions”.  The group attended the Ocean Wealth Summit in Cork on Monday.

The world, Mr Higgins said, could be considered “a collection of related communities, of peoples separated, and at the same time connected, by our vast oceans and our great continents – all of us are inter-connected, voluntarily or involuntarily, sharing our humanity, our terrible failings, but also our great potential for good and, of course, our innate fragility on what is now an ever-more perilous planet”.

The shared island experience was happening within a context of “a financialised global economy” with its specific pressures, threats that are now perilous from climate change and which are largely sourced in developed countries.  “Many of us have been the victims of colonialism and still carry its legacy and the challenges that it brings, but island peoples are now bearing new reconfigured versions of that legacy of colonisation.”  In facing new challenges he believed a shared, concerted determined strategy within the multilateral institutions and in diplomatic practice was vital.

So much insatiable, accelerating and unregulated economic growth was primarily for the benefit of countries of the northern hemisphere, which at a wider level was “creating havoc and destruction through a climate change that is impacting on the lives of those who are the least contributors to our climate crisis, but who are its most proximate victims”.  Such circumstances were sometimes presented as unavoidable, “the inevitable results of global markets over which control is impossible. Such a view of course sets democracy itself at global level into tension with the role of the market”.

Mr Higgins added: “We must all, north and south of our shared vulnerable planet, muster the courage to free ourselves from the cage of those narrow assumptions of a destructively limited version of economics that has condemned us to such insufficient action. We must expose and oppose the obdurate continuation of what has been shown to be unsustainable. We must resist any evasion or quietism.”

If the global response lacked urgency and craft, “we will be correctly regarded by future survivors of our planet as having been in collusion in the destruction of the lives and life-worlds of some of the most vulnerable peoples of our human family and the biodiversity on which our planetary life depends”.

Mr Higgins said it would be “a great failure if our response is to acquire with, or settle for, a resile to a rehearsal of old prejudices” based on nationalities, religions, races or of power and aggression.  “A much deeper sense of our common humanity, an invocation of hope and authentic commitment is needed to create an engaged consciousness of the impact of our present practices such as will drive a global acknowledgement of our shared vulnerabilities, our kinship to each other in the common threats we face, achieve such a realisation as might allow us to transcend all barriers and boundaries.”

There was a need to repair often broken and dysfunctional relationships that exist across lands and seas, the results of destructive social and economic practices that saw nature and resources that might have been for renewal as something that constituted an infinite mine for insatiable extraction.  “Our task is now so urgent in light of the existential threat facing humankind in terms of the climate change and biodiversity crises, that it now requires a co-ordinated global response.”  A sense of justice “requires that our residual sense of a shared humanity must be invoked to reconnect our lives through a balanced relationship between ecology, ethics, economy, culture and lived experience”, the President said.

The future of our oceans and islands had a special importance in environmental terms “if we are to mitigate and adapt to climate change, extreme weather events, sea level rises, and deal with the horrifying increases in ocean contaminants – such as plastics”.  It was depressing that lessons from history, fundamental to co-existence on the planet were “treated with a lazy disregard or are consciously hidden”, he added.

There had to be a space, “an agreed forum, where we can transcend self-interest, engage with the other, and the UN was the best effort at achieving that space. Whatever its shortcomings it had been a beacon of values, a platform to come together to share perspectives and principles.  “Such progress…has been hard won, and any easy pursuit of our new issues should not be taken for granted as fixed as a Cold War rhetoric is renewed and multilateral institutions are increasingly threatened and starved of resources.”

At the UN, Ireland had sought to speak with a resonant tone, driven by the understanding that all voices must be respected. “It has been the smallest voices which have been the ones that have performed as disinterested partners in advancement of the common good. The UN flourishes when such voices are heard.”

There was also a need to be authentic. “A UN that privileges the strong and neglects the weak betrays its own founding principles. A UN that confines the moral purpose of its charter to discussions and decisions at the General Assembly and then going on to ignore the voices of the world defines the purpose of the UN narrowly as being content with an under-labourer role of mediating the frequent abuses of the powerful on the Security Council. We must save the UN from such a fate of impotence.”

A new agenda of “eco-social gendered political economy” was possible “if we are willing to work and unite for it”, the President said. This had been achieved in 2015 with adoption of the Paris Agreement and the sustainable development goals; “landmark achievements, representing a vital step towards a sustainable future”. There were disappointments since, notably the US signalling “its highly regressive intention” to withdraw from the agreement.

With further consolidation of the agreement scheduled this year, he said, “Ireland stands with you in recognising the broader moral authority of small island developing states, whose very existence is threatened should we fail to respond collectively”.