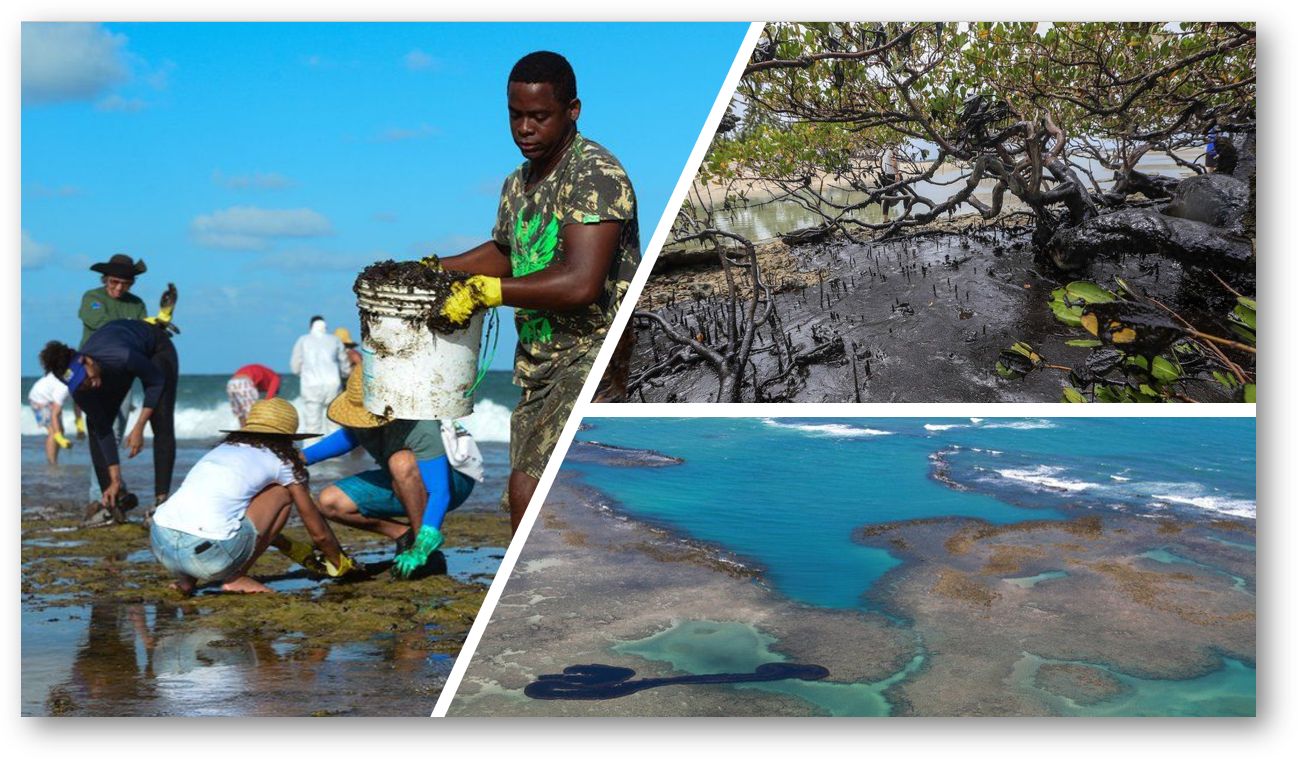 Thousands of people have taken part in a huge clean-up operation to remove oil and tar from beaches along Brazil’s north-eastern coast.  Volunteers, as well as government workers, used wheelbarrows, spades and plastic gloves to remove the thick tar from the sand and water.

The source of the spill, which was first detected on 2 September, remains a mystery.  Experts say this could be the worst disaster for the region’s coral reefs.  It has affected wildlife and popular beaches including Praia do Futuro in Ceará, Maragogi in Alagoas, and Itacaré and Ilhéus in Bahia.  At least 15 sea turtles, two seabirds and one fish have been found dead, the environmental agency Ibama said.

It was not clear if the volume of oil was increasing or decreasing and how long the problem, which has affected 187 places in nine states, will last.  On Thursday, Ibama President Eduardo Bim said tests had proved the crude oil was produced in Venezuela but officials had not been able to identify the vessel responsible for the leak.  This did not mean that Venezuela was responsible for the leak, he added, describing the case as “unprecedented”. Venezuela, however, has denied responsibility for the oil.

The incident is more challenging than a typical oil spill because the dense crude is not floating on the surface and only appears when it washes up on shore, Mr Bim was quoted by Reuters news agency as saying.  Floating barriers usually employed to prevent oil from washing ashore have little effect, for example, so the work has been focused on cleaning up the crude as it comes to the coast.

In Pernambuco state, 30 tonnes of oil were removed from beaches on Saturday alone.  Meanwhile, federal prosecutors have accused the federal government of failing to organise a response, saying the spill has caused environmental damage in an area spanning 2,100km (1,300 miles).

Environmental incidents, such as an oil or chemical spill, can cause major headaches for companies, homeowners and regulators.  The fallout can be wide-reaching, with pollutants quickly spreading to affect controlled waters, buildings and other amenities.  Verde provide emergency response services to mitigate impact as response time is critical to reducing the risk associated with an incident. Getting the right technical and legislative advice is also essential to avoid any costly mistakes.

Do you have an environmental emergency?

Contact us directly at 1890 20 10 20 and we can mobilise an Emergency Response Team immediately.