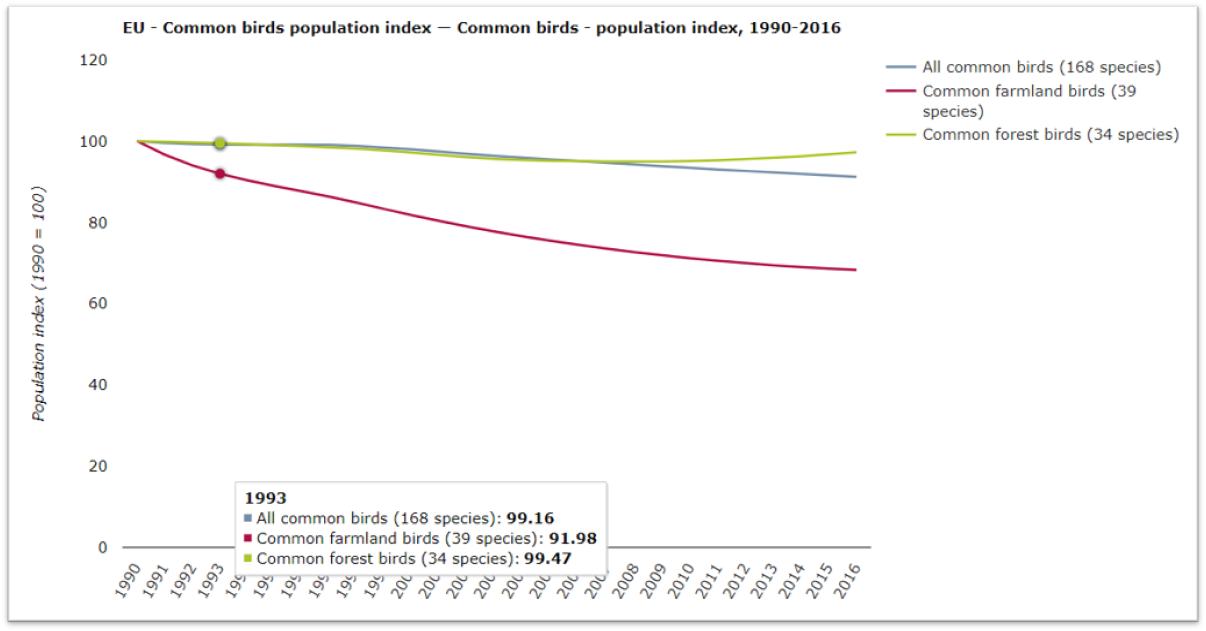 Trends in bird and butterfly populations can be excellent indicators for the health of the environment.  Alarmingly, both of them show significant downward trends, with no signs of recovery.

Birds and butterflies are sensitive to environmental change and their population numbers can reflect changes in ecosystems as well as in other animal and plant populations. Trends in bird and butterfly populations can, therefore, be excellent barometers of the health of the environment. The status of birds and butterflies has been the subject of long-term monitoring in Europe, much of it via voluntary effort. Both species groups have a strong resonance with the interested public and are good examples of how the power of citizen science can be released through effective targeting.

The long term trends (over 25 years) revealed by monitoring schemes for common birds, in particular farmland birds, show significant declines, with no signs of recovery. Between 1990 and 2016, there was a decrease of 9 % in the index of common birds in the 26 EU Member States with bird population monitoring schemes. The decrease is slightly greater (11 %) if figures for Norway and Switzerland are included. The common forest bird index decreased by 3 % (EU) and by 5 % (EU plus Norway and Switzerland). The decline in common farmland bird numbers was much more pronounced, at 32 % (EU) and 35 % (EU plus Norway and Switzerland). While this indicator takes 1990 as a starting point, it should be borne in mind that significant decreases had already occurred before this date.

In spite of year-to-year fluctuations, which are typical features of butterfly populations, the index of grassland butterflies has declined significantly in the 15 EU countries with butterfly population monitoring schemes. In 2017, the index was 39 % below its 1990 value. As with bird indices, the reductions observed since 1990 are on top of decreases before that time.

The long-term trends in common bird and grassland butterfly populations demonstrate that Europe has experienced a major decline in biodiversity. This has been primarily due to the loss, fragmentation and degradation of natural and semi-natural ecosystems, mainly caused by agricultural intensification, intensive forest management and land abandonment or urban sprawl. For example, through habitat loss, fragmentation and simplification (e.g. the removal of hedgerows and tree lines to make fields larger), birds lose their nesting sites and food sources, which adds to population decline. The main driver of the decline in grassland butterflies is the intensification of farming and change in rural land use, including abandonment of grasslands. The loss of species-rich semi-natural grasslands has been particularly detrimental. Moreover, agricultural intensification can entail high inputs of agrochemicals, including pesticides, which can dramatically reduce insect – and butterfly – populations.

It continues to be a challenge to achieve the wide and effective deployment of conservation measures in European policies such as the Birds and the Habitats Directives, and the Water Framework Directive (2000/60/EC, as well as the environmental measures in the Common Agricultural Policy (CAP) designed to help populations recover at national and European scales.

It is difficult to forecast how soon biodiversity, as illustrated by the abundance of bird and grassland butterfly populations, will recover, as their state is influenced by a complex combination of environmental factors and policy measures. Positive impacts of the CAP reform and the measures anticipated under the Multi-Annual Financial Framework 2014-2020 on common species associated with farmland might become visible in the 2020-2030 period, as long as these policies are implemented thoroughly and on a large scale throughout the EU. On the other hand, other factors that could have adverse effects on the outlook beyond 2020 include the negative impact of climate change on biodiversity and ecosystems, particularly on those specialist species groups that are dependent on non-intensive agriculture and forest ecosystems. The increased competition for land could also intensify agricultural production in the EU through land take via urbanisation, as well as for the production of renewable energy and biofuels.

Verde Environmental Consultants are highly experienced and are qualified to carry out Appropriate Assessments.

We have completed Appropriate Assessments and Natura Impact Statements (NIS) for numerous projects in terrestrial, freshwater and marine environments across Ireland.