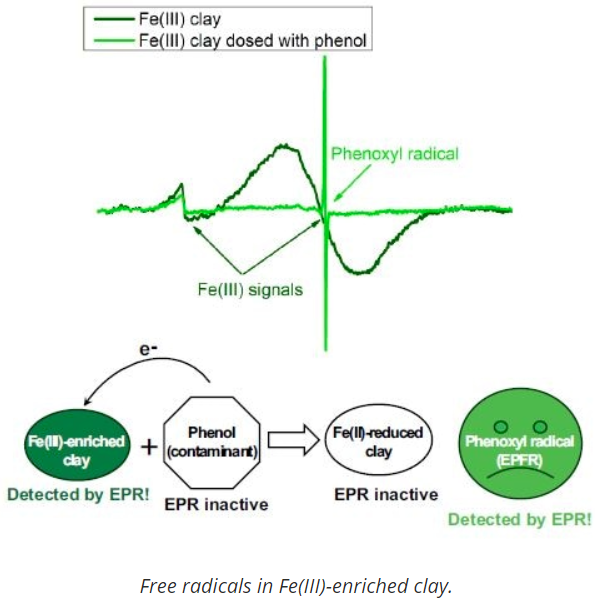 Soil pollution is a direct result of agricultural, industrial, and societal growth. A lot of the common pollutants can be identified with EPR (Electron Paramagnetic Resonance), leading to measures to control their distribution and help in clean-up strategies.  EPR in a Nutshell

Typical soil pollutants are due to industrial waste, including radioactive materials, cytotoxic chemicals, poisonous gases, and cancer-causing agents. Industrial heavy metal by-products such as lead and mercury, cadmium, chromium, or agricultural burdens including herbicides, pesticides, insecticides, and fertilizers can also cause them.

Each of these pollutants are toxic and frequently engage in processes resulting in the formation of surface-stabilized EPFRs. EPFRs play a part in the further production of toxic compounds and also play a part in radical processes which influence the formation of humic substances, and carbon sequestration. It has also been discovered that EPFR-containing particles can produce ROS that induce oxidative stress.

Utilizing EPR, metal toxicity studies have been performed on plants ranging from lupins to lichens. EPR has also been utilized to assess the availability and mobility of transition metal ions like manganese (II) in soils.  In order to understand the impact of pollution from industrial and agricultural sources on the soil environment, detailed research is needed. Understanding the roles and mechanisms of the organic, inorganic, and biological components of soil results in effective approaches to neutralize toxic compounds.

EPR is perfect for soil analysis because scientists can detect, quantify and monitor short-lived ROS’s, long-lived ERFRs in soil organic matter, and paramagnetic heavy metals by examining an EPR signal. Figure 2 shows studies on free radicals in Fe(III)-enriched clay (1).  Clay minerals behave as a potential reservoir of toxic organic pollutants and transition metals. In this instance, EPR exhibits the catalytic role of transition metal centers (Fe3+) in phenol contaminated clay minerals in the formation of EPFRs. EPR monitors and measures the formation of EPFRs using an oxidation-reduction mechanism.

EPR in the Future

The 21st century environmental pollution issues are extremely clear. Nine out of every ten people on the planet breathe air that has high levels of pollutants, killing seven million people every year, according to a World Health Organization (WHO) study (2). People across Africa and Asia are the worst hit with over 90% of air pollution-related deaths.

In addition, cities in Europe, the Americas, and the Eastern Mediterranean also have air pollution levels which are above WHO health limits. EPR has become an increasingly valuable technique in detecting free radicals since its commercialization in the 1950s. Benchtop EPR systems have made the technology much more accessible, providing ease-of-use, decreased ownership cost, and advanced capabilities with a minimal footprint.

As scientists get to grips with EPR, the possibilities of the method have grown across a number of areas in addition to environmental, such as health and food. For example, EPR can be used to detect the carbon-based radicals derived from roasting coffee beans or toasting bread, radicals from drug degradation, and even to detect antioxidants’ radicals in vitamins. The importance of EPR as a detection tool is one that continues to evolve.

Verde Environmental Consultants  undertake characterisation of soils as required by landfill regulations and undertake the necessary sampling to assess whether a waste is classified as hazardous or non-hazardous. Our specialists are trained in the use of the appropriate classification tools and have an in-depth knowledge of the relevant legislation and guidance, which allows them to guide clients in establishing cost effective and sustainable soil management solutions.

Avail of Verde’s FREE Soil Waste Classification One Hour Seminar – a must for anybody involved in construction projects particularly where brownfield sites are being developed.  Register Here