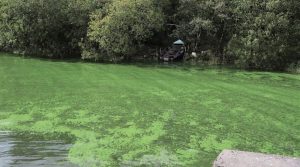 Eamon Ross from the LSTPA is calling on the Environmental Protection Agency (EPA), Inland Fisheries Ireland (IFI) and Cavan County Council to develop and put in place a co-ordinated nutrient management plan for the lough.

Such a plan would take account of all effluent sources including from local waste water treatment plants facilities in Ballyjamesduff and Oldcastle.

This plan, Mr Ross believes, should also factor in the levels of effluent seeping from adjoining agricultural land and any other sources of phosphate.

Algae are a type of plant that occur naturally in rivers and lakes throughout Ireland. They are very small and many can only be seen with the use of a microscope. Many environmental factors influence the growth of algae but nutrients, along with sunlight and temperature, are among the largest factors.  Algal blooms can give rise to water quality issues such as water discolouration, smell and odour problems.

The EPA is responsible for monitoring Lough Sheelin as part of the Water Framework Directive monitoring programme.  In a detailed response, a spokesperson for the EPA said: “Most blooms do not pose a risk. However some blue green algae, which are quite distinctive with their turquoise scum, may produce toxins which may pose a risk to public and animal health.”  In relation to its monitoring activities on the lough, the spokesperson confirmed: “We are currently half way through our three-year cycle, which runs from 2019-2021. As part of the chemical monitoring programme, chemical samples are taken at five stations on Lough Sheelin, generally at a frequency of four times per year.”

Cavan Council collects water samples for chemical analysis on behalf of the EPA and they are analysed at accredited labs.  These water samples are analysed for a number of general parameters such as dissolved oxygen, pH, conductivity, but also for nutrient inputs such as Nitrate, Nitrite, Ortho Phosphate and total Phosphorus.  Biological sampling, which includes fish, plants and diatoms, is also carried out once every three years on Lough Sheelin, according to the EPA.

However, COVID-19 restrictions meant that Macrophyte samples could not be taken from Sheelin last summer.  The EPA anticipates this will now take place, later than expected, in 2021.  Most of the biological sampling is carried out by the EPA, except for fish which is carried out by Inland Fisheries Ireland (IFI).

The EPA, meanwhile, further confirmed that Lough Sheelin is listed as a ‘Priority Area of Action’ in the 2nd River Basin Management Plan (2018-2021). As part of this, the EPA spokesperson confirmed: “The Local Authority Waters Programme (LAWPRO) is currently involved in more detailed investigations to determine possible sources of pollution within this catchment.”

He further confirmed that the EPA, Cavan County Council and Inland Fisheries Ireland liaise closely on all water quality issues and in producing a sampling programme.

In respect of effluent discharge from the waste water treatment plant in Oldcastle, the EPA confirmed to theCeltthat both are “fully compliant” with waste water discharge emission limit vales (ELVs).  “Irish Water have reported no breaches to the EPA,” said the spokesperson.

The Ballyjamesduff plant was fully compliant in 2018 and 2019. However, new/tighter ELVs came into force in 2020 and Irish Water has not yet implemented specified improvements required at the Ballyjamesduff facility.  “There have been exceedances of the new Emission Limit Values in 2020,” said the EPA spokesperson, adding that the EPA has an “open compliance investigation” in relation to this issue.

In relation to the issues at Ballyjamesduff, Irish Water told theCeltlast week that it is“not aware of the causeorsourceof algalbloom on Lough Sheelin.”  A spokesperson noted: “Algal Bloom can caused by many diffuse sources of pollution andcan be seasonalornaturally occurring.”

In relation to the planned upgrade, the spokesperson said itis“progressing and is currently at detailed design stage”.  A spokesperson confirmed: “Funding has been secured for the works and it will be delivered during the current Irish Water investment plan 2020-2024.”  When the works are completed, the plant will haveadditional capacity to meet existing and future population demands, as well as increasing storm storage capacity and providing a new inlet works.  However Irish Water conceded: “Significant capital investment will be required to meet the Emission Limit Values specified in the licence.”

Mr Ross from the LSTPA says, regardless of scientific tests and the results of same, one only has to look at the lake to see there is a problem.  He believes more frequent sampling is required on Lough Sheelin, saying four times a year is not sufficient to ensure water quality.“ Lough Sheelin was sampled on a weekly basis up to a couple of years ago by the Fisheries Board and the last readings that we saw indicated that the Phosphate levels in the lake were still at a dangerous level,” he remarked.  “What Anglers are seeing when out fishing is that there is a bloom on the lake that has now persisted from August right up to the present in November,” added Mr Ross who feels there needs to be a more co-ordinated approach to deal with the issue.  It is our view that the water quality in the lake is not as it should be. We don’t believe that it is good. Nobody who looked at the lake from August to now could, in any way, say that the water quality in the lake is good,” insists Mr Ross.  “We don’t want to be alarmist, and we would like to get that across in the Celt, we are just highlighting something we believe is a serious issue. We, as a club, are actually thinking of setting up some type of independent analysis of the lake. We do not think what we are seeing is reflecting reality,” he opined.  “There is also good news in relation to Sheelin. I looked at trout spawning on rivers yesterday and there is a good stock of healthy wild trout in the lake. It would be just a pity to see it revert back to what it was before.I don’t want to fall out with the EPA or the Council but what we are saying is – we need to look at this!” said Mr Ross.

On a more positive note, the LSTPA in conjunction with Inland Fisheries Ireland (IFI) and LEADER are undertaking a development programme on the Derrylea stretch of the Mountnugent river to enhance trout spawning capacity.

Verde provide all aspects of hydrogeological services such as groundwater abstraction feasibility assessments, authorisation of discharges to groundwater technical assessments and water quality/level monitoring. The development of sustainable groundwater resources is a key element in helping our clients to reduce costs associated with the use of water.

Our Water services include: 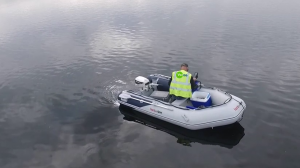