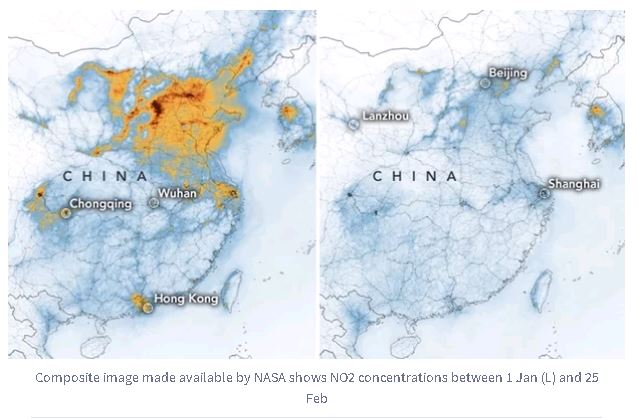 Air pollution levels and warming gases are showing significant drops worldwide as Covid-19 shuts down entire regions.  In particular, at one of the world’s most famous tourist spots, fish were seen for the first time years in cleaner and clearer waters in Venice’s canals as tourism halted.

Satellite images have also been circulating showing how the scale of the powerful lockdowns have reduced air pollution in China and Italy this year. Photographs from NASA at the beginning of the month outlined the dramatic fall in pollution across China that was “partly related” to the economic slowdown due to the coronavirus outbreak, the space agency said.

Most of the reduction is from nitrogen dioxide (NO₂) in cities, which can be released from car exhausts. NO₂ is not a greenhouse gas, but can be harmful for human health by increasing the likelihood of respiratory problems.  Atmospheric particles known as PM2.5 are also reducing which is a leading environmental cause of poor health. Some experts believe that the thousands of people could benefit from the cleaner air.  “It is possible to estimate that with things at a standstill in China for two months, 80,000 premature deaths have been prevented,” said Professor John Wenger from the Centre for Research into Atmospheric Chemistry at UCC.

More than 1,000 people in Ireland die prematurely each year as a result of poor air quality, according to the Environment Protection Agency. Monitoring by the European Space Agency has also revealed the scale of the drop in nitrogen dioxide emissions over Italy following the country suspending nearly all movements. The north of Italy has been worst hit by the virus, but it is also an area of major activity. The Po River Valley is the most important economic region in the country, as it is the centre of most Italian industry and an agricultural heartland, but work there has seen a dramatic reduction.

Amid the illness and unpredictability of the coronavirus, Prof Wenger told RTÉ News that he believes Irish cities like Dublin and Cork could, in time, see a massive reduction in the gas as people avoid non-essential travel during the pandemic.

Already in New York, researchers argue in a new report that they have already seen the difference there after its governor announced movement in the city would be limited.  Usually every day, 4.4 million vehicles travel through NYC. However, in one week, carbon monoxide (CO) levels, mainly from vehicles, have been reduced by 50% since the pandemic. An Irish researcher working on the report at Columbia University said this is because New York traffic levels are down by about a third as the United States tries to curb unnecessary travel during the outbreak.  Prof Róisín Commane, from the University’s Dept of Earth and Environmental Sciences, said CO and particle concentrations in New York are now similar to small coastal towns in Ireland. She added that the current findings should prove to people that it is possible to reduce pollutants and emissions.

While a pandemic is not the right way to do that, Prof Commane said that we need measures which produce similar effects without drastically impacting people’s lives.  “We can get people off the roads – if we can provide them with other ways of doing it. We can make it work. We have seen the results” she said.

Over the coming weeks, as Covid-19 numbers are predicted to rise, experts are expecting a further fall in air pollutants and emissions across Europe and the United States. At the end of the day, it will only be a “brief hiatus” in the overall scheme of things, said Prof Wenger. As it seems China has got a handle on the Covid-19 outbreak, nitrogen dioxide emissions are increasing again as life begins to resume in the country.  However, Prof Wenger said what has happened is a chance for people to “rethink their lives”. For instance, he said, as employees work remotely,. it shows that they can greatly reduce their travel by holding meetings online which could help the environment in the future.  “This is a very interesting time and we will learn a lot from how we do things,” he said.